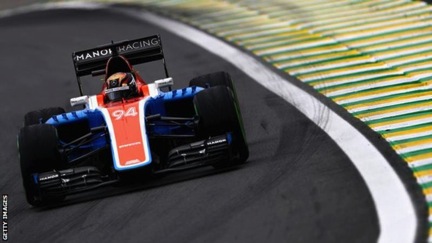 Staff at Manor have been told administrators have made progress in talks with possible investors that could lead to the team’s survival.

The F1 team went into administration on January 6 and will collapse if a buyer is not found.

Administrators FRP Advisory said they had “the start of the season firmly in mind” as they seek to secure funding.

Manor need more than £500,000 to be able take part in pre-season testing and prepare for the first race.

Insiders say the hope is that money can be sourced before a deadline at the end of next week.

Manor’s future looked bleak at the start of this week but prospects have improved considerably over the last few days, BBC Sport has learned.

However, the continued survival of the team depends on the promised money actually turning up next week.

BBC Sport revealed last week that there is enough money to pay staff until the end of January, but if no extra income comes in by then FRP Advisory will have to consider whether to lay off staff.

The identity of the investor considered the leading candidate as the potential new owner has not yet emerged.

But another who has held talks about a purchase is Indonesian businessman Ricardo Galael, whose companies sponsored his son Sean and the Campos team in GP2 last year.

Manor are contemplating using a modified 2016 car to start the season, despite major changes in the rules that will make cars faster by up to five seconds a lap.

The team has been granted permission by governing body the FIA to use their 2016 chassis as the basis for the car they race this year if necessary, although they would have to ensure it complied with the 2017 regulations.

This means they do not necessarily have to conduct again the mandatory crash tests, one of the biggest hurdles for teams before they start testing a new car.