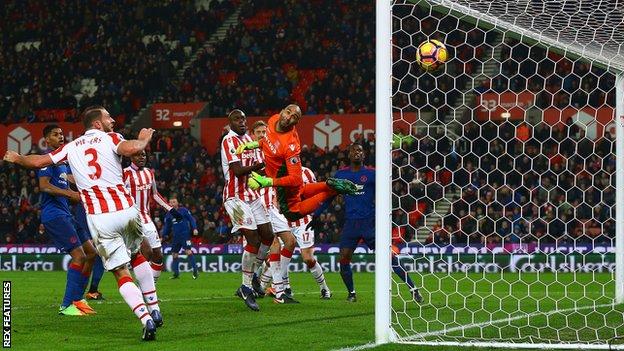 Sir Bobby Charlton says Wayne Rooney is “a true great for club and country” after the striker broke his Manchester United all-time goalscoring record. Rooney’s injury-time equaliser at Stoke on Saturday was his 250th for United, breaking Charlton’s 44-year-old record.

“I would be lying to say that I’m not disappointed to have lost the record,” Charlton, 79, told the United website.

“However, I can honestly say that I’m delighted for Wayne. He deserves his place in the history books.”

He continued: “He is a true great for club and country, and it is fitting that he is now the highest goalscorer for both United and England.

“It has been great to watch him every week since his arrival at Old Trafford in 2004; he set the tone with a wonderful hat-trick on his debut and he has thrilled us all in the years since, going on to enjoy a hugely successful career.

“I was 35 when I retired. Wayne is only 31 and still going strong, so I don’t think he’s done by a long stretch yet. He continues to show that he can contribute goals, assists and performances whenever called upon. He will raise the bar even further before he calls it a day.

“Now he’s the man to beat, and I can’t see anybody doing that for a long, long time.”

Sir Alex Ferguson, who managed United from 1986 to 2013 and brought Rooney to the club in August 2004 from Everton, told ManUtd.com: “I would like to say huge congratulations to Wayne on reaching this milestone.

“Wayne thoroughly deserves his place in the history books of this great club and I am sure that he will go on to score many more goals.”

“Before him the record belonged to a legend of English football. Now Wayne becomes a legend of Manchester United.”

Stoke boss Mark Hughes, who had two spells as a striker with United said: “It is an outstanding record and won’t be surpassed. It has taken 40-odd years for Sir Bobby’s record to be broken which shows how high a mark it was.”

Rooney, 31, said he was honoured to break the record.

“I am very proud,” he told Sky Sports. “It is not something I expected when I joined. I am proud and I hope there is more to come.

“The players who have played for this club have been world class. I am proud to play for this club and to be all-time goalscorer is a huge honour.”