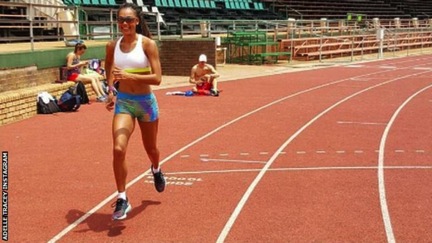 At the start of an important year in athletics – including this summer’s World Championships in London – BBC Sport’s lead commentator Steve Cram is in South Africa mentoring a group of British athletes during a training camp at altitude in Potchefstroom, two hours’ drive from Johannesburg.

On paper a warm-weather training camp sounds like a bit of a jolly, but it’s anything but for the British athletes over here at the minute.

We’ve got the South African football team the Kaiser Chiefs staying in the same accommodation as us and our athletes are definitely doing a lot more than those guys, that’s for sure.

Most athletes are doing two sessions a day plus gym sessions, massage, nutritionist appointments – they are busy days. A meal out with a dessert every once in a while is their idea of a wild night out here in Potchefstroom.

Double sessions bring me on to the discussion of Laura Muir. Laura has had a great start to the season with a British 5,000m record and she is looking great out here in South Africa.

She’s at a really good place in her career but what she doesn’t have yet is a major championship medal.

The European Indoor Championships is a great chance for her and I know there has been some talk about her doubling up over 1,500m and 5,000m, both indoors and outdoors, this season. I am not sure whether Laura has actually said that is what she definitely wants to do, rather she has said the schedule allows it, which is a little bit different.

The very fact that she is talking about it though shows she is obviously not setting her targets low, which is great. You don’t win things by not thinking big. Laura has always struck me as quite quiet but she has never lacked confidence. I’ve seen her train quite a lot over the last few years – she doesn’t have very many easy days.