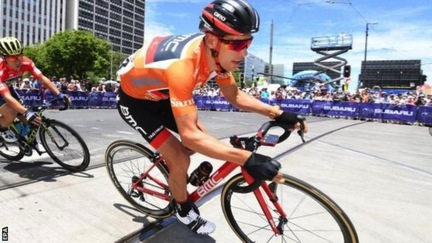 Australia’s Richie Porte won the first event on the 2017 UCI WorldTour when he claimed victory in the Tour Down Under.

The ex-Team Sky rider, who was second in the past two years, finished behind compatriot Caleb Ewan in a bunch sprint on the 90km final stage in Adelaide.

Porte, who now rides for BMC Racing, had won Saturday’s fifth stage to lead by 48 seconds.

“It’s just incredible to come back here and win after being so close the past two years,” he said.

“I had a good break at the end of last season and I’ve come back refreshed – physically and mentally – and to win this race, it means a hell of a lot.”

Ewan’s sprint victory, where he edged out world champion Peter Sagan, gave him his fourth stage win as he joined Germany’s Andre Greipel (2008) and Australia’s Robbie McEwen (2002) as the only riders to have won four stages in the same edition of the race.