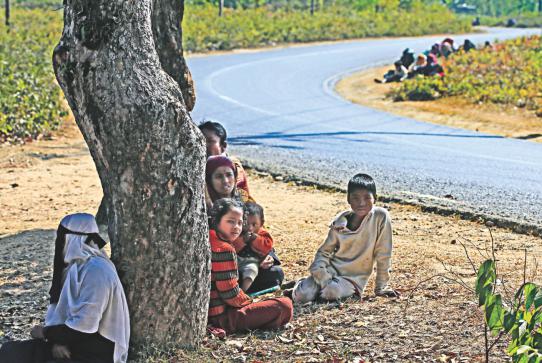 Every day, streams of Rohingya people, mostly women and children, dot a 15km stretch of the road from Ukhia to Teknaf in Cox’s Bazar.

They start flocking in small groups on the roadsides after daybreak, drawing attention of hundreds of holidaymakers who traverse the highway on their way to St Martin’s Island via Teknaf from the seashore town of Cox’s Bazar.

Many of this “stateless” population, having been denied of their right to citizenship in Myanmar and with no official “refugee” status in Bangladesh, spend best parts of the day begging.

Kind vacationers, aware of the recent atrocities unleashed on one of the world’s most persecuted minorities on the other side of the fence triggering a fresh influx of Rohingyas, are often seen stopping by, offering help in cash or kind before heading for their destinations.

This has become a daily routine for many desperate Rohingyas. On some counts, at least 1.5 lakh of them are now living in misery in four ghettos in Ukhia and Teknaf.

Bangladesh that is playing host, officially and unofficially, to thousands of Rohingyas, is alarmed by the recent influx.

Officially, they are “infiltrators” and law does not allow them teem the streets and beg alms. Humanity is altogether another thing.

“Benevolent people come by cars and microbuses, stop by, and give us money and winter clothes,” said Samuda Khatun, a Rohingya woman aged 52 standing near the highway.

Moulvi Bakhtiar Ahmed, a member of Kutupalong Union Parishad, told The Daily Star that people travelling to Teknaf and St Martin’s tend to provide the distressed Rohingyas with whatever supports they could as an act of compassion.

Cox’s Bazar Deputy Commissioner Md Ali Hossain explained that charities, individuals or institutions, cannot offer any help to the Rohingyas in the slums without permission from the administration.

Official figures show over 65,000 Rohingya Muslims entered Bangladesh amid rights violations and violence in Myanmar following the killing of some law enforcers at the hands of till to be identified miscreants. The fresh inflow came on top of nearly half a million Rohingyas who have been living mostly without “refugee” status for over a decade.

While officially Bangladesh pushed back a handful of Rohingyas, humanity played a big part allowing, one way or the other, thousands of them since October.

But taking advantage of the situation, a syndicate of middlemen made some quick bucks by letting Rohingyas cross into Bangladesh, already a densely populated country. Bangladesh’s population density is 1,015 per sqkm, which is three and seven times that in India and China.

Recently, the issue prompted the Prime Minister’s Office to ask the home ministry to take stern action against some 168 middlemen. Otherwise, the PMO cautioned, the situation might be “dreadful.”

A report by an intelligence agency recommended that apart from alerting the Coast Guard along with the BGB to stop this inflow, the government should figure out the actual number of Rohingyas who entered the country and bring them all in a single place so that they can be sent back, said sources at the PMO.

On average, over 1,000 Rohingyas have been entering Bangladesh every day since a crackdown in the north of Rakhine state late last year. The previous rate of Rohingya influx was 50 a day, according to the report.

Bangladesh shares with Myanmar a 272km border that falls in Bandarban and Cox’s Bazar. Of this, a 52km stretch is by the Naf river. Some areas are so remote and impassable that BGB men cannot patrol there.

There is no barbed-wire fence along the border on the Naf river that divides the two countries, making it easy for the Rohingya people to cross into Bangladesh illegally.

According to the report, 154 of the 168 middlemen are from Cox’s Bazar and the rest from Bandarban. With the help of fishermen and boatmen, they bring in the desperate Rohingya people in return for money.

Relatives of many Rohingyas live in Bangladesh and they too help their relatives in Myanmar to come here.

The middlemen used night time to dodge the BGB patrol and charged up to Tk 5,000 from each to be sheltered.