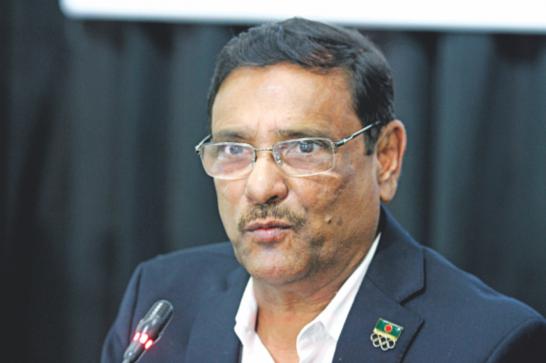 Awami League General Secretary Obaidul Quader claimed that the BNP had proposed former chief justice KM Hasan for appointment to the search committee to form the next Election Commission.

BNP Secretary General Mirza Fakhrul Islam Alamgir, however, claimed what Quader had said was baseless and urged him to withdraw the comment.

President Abdul Hamid held talks with 31 political parties on forming the next EC. The BNP during its meeting with the president proposed some names for the search committee but neither the party nor the Bangabhaban disclosed those.

The country’s political arena had gone from bad to worse when the last BNP government extended the retirement age of judges, resulting in Justice KM Hasan being in line to head then next caretaker government.

Addressing a programme at Mahanagar Natyamancha, Quader said, “You [Khaleda] have proposed the name of ex-chief justice KM Hasan, whom you wanted to make your chief adviser, to be included in the search committee. Was not KM Hasan the international affairs adviser of the BNP? Then who is neutral? Who is biased?”

Just a few hours later at a programme in the capital, Fakhrul said, “It is my question whether the Awami League or Mr Quader have any secret link to the president? Various political parties are taking part in the discussion and making proposals, Will the president form the search committee after talking to them [AL]?

“Obaidul Quader’s statement is totally false. I think he should withdraw his comment,” he said.

Quader said the government would not interfere in the formation of the EC.

He said the people the president would name would not be open supporters of the Awami League or the BNP. “What the BNP had done, the Awami league will not do.”

President Hamid had finished talks with the political parties and he is likely to form the search committee soon.