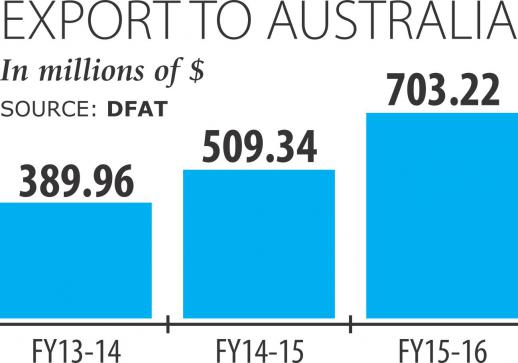 Exports to Australia soared 38.1 percent year-on-year to $703.22 million in fiscal 2015-16 despite a ban on direct cargo from Dhaka, according to the Department of Foreign Affairs and Trade of the Australian government.

Over the next five years, shipments to Australia are expected to grow 33.8 percent, DFAT said.

Australia became a major export destination for Bangladesh under the government’s stimulus package for new markets.

However, trade hit a bump in the road last year as Australia in December 2015 imposed a ban on direct cargo from Bangladesh along with Syria, Egypt, Yemen and Somalia as a preventive security measure.

The embargo meant for packages heavier than 500g was relaxed partially in May last year.

The restrictions apply equally to cargo carried on passenger and freight aircraft, Australia’s Department of Infrastructure and Regional Development said when imposing the ban.

“Australia is a very promising country for us as our export of garment items is on the rise for having higher demand over there,” said Mohammed Nasir, vice-president of Bangladesh Garment Manufacturers and Exporters Association.

After the ban Nasir held several meetings with the civil aviation ministry of Bangladesh and the high-ups of the Australian High Commission in Dhaka.

“We are exporting the goods to Australia mainly via Singapore and Dubai now.”

It takes two to three days more than the normal time for sending goods to Australia from Bangladesh as the consignment needs to be re-screened at a third country following the ban, Nasir told The Daily Star by phone.

Bangladesh has the potential to export one billion worth of garment products to 11 emerging countries within the next one or two years, and Australia is one of those markets.

Bangladesh is the second largest import destination among the South Asian peers for Australia. The country stood at 32, while India’s position was 13.

Among the garment exporting countries, the position of Vietnam is 16th to Australia. Vietnam’s exports to Australia stood at more than $4 billion, of which most are apparel items.

Kmart, Australian Woolworth and Target Australia are the major Australian garment buyers from Bangladesh, according to exporters.