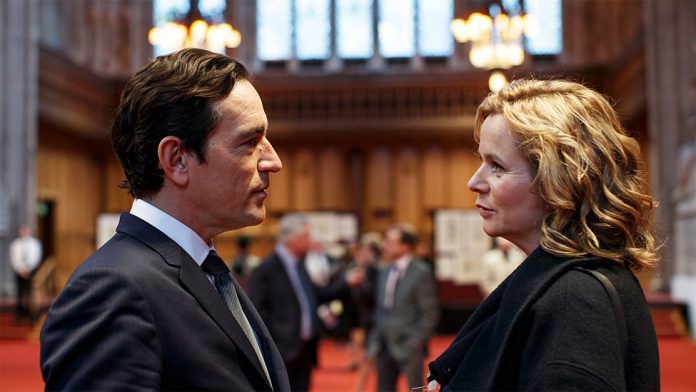 This weekend, the BBC launches its lavish four-part TV adaptation of Louise Doughty’s novel Apple Tree Yard. A sharply contemporary psycho-drama, it tells the story of a renowned scientist who risks everything by beginning an affair with a duplicitous stranger and eventually winds up in the dock. Writer and broadcaster BIDISHA appraises Doughty’s work.

In Louise Doughty’s Apple Tree Yard no relationship or character is quite what they seem. And, from the law courts to Parliament to the great houses of scientific research, the country’s most venerable buildings and institutions conceal conspiracies, secrets and set-ups as shocking as they are sordid.

Underneath the apparently modern, glittering surface of sophistication, power and success are some extremely retrograde opinions about how women should behave, which ultimately conspire to bring down the central character.

Apple Tree Yard was Louise Doughty’s seventh novel, published in 2013; it has sold more than a quarter of a million copies in the UK and been translated into 26 languages. The TV adaptation has been written by Amanda Coe and directed by Jessica Hobbs and while it will no doubt enable a huge new primetime audience to appreciate Doughty’s clever plotting and whip-fast storytelling, I hope it compels just as many people to read Apple Tree Yard as a novel and then discover the rest of Doughty’s exceptional body of work.

Doughty’s eighth and latest book, Black Water, came out last year, but she has been a published novelist since her 1995 debut, Crazy Paving.

She has been shortlisted for, and indeed judged, many of the major UK literary prizes. But it was the publication in 2010 of her sixth novel, Whatever You Love, that pulled Doughty sharply into focus as one of