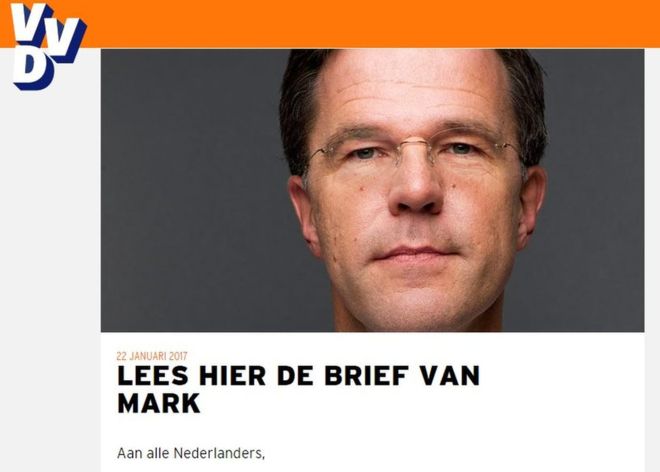 Weeks before Dutch voters go to the polls, Prime Minister Mark Rutte has said that anyone who rejects the country’s values should leave.

“Act normal, or go away,” he says, in a message seen as taking on the anti-immigration Freedom party currently running high in the opinion polls.

The Dutch felt increasingly uncomfortable with people who abused the very freedom they came in search of, Mr Rutte argued.

Elections are taking place on 15 March.

But even if Mr Wilders wins the election he will struggle to form a coalition, after Mr Rutte ruled out forming a government with the PVV.

Political commentators pointed out that the election was now being run on the national mood rather than traditional issues such as the economy and the government’s handling of the financial crisis.

Last week Conservative CDA leader Sybrand Buma accused the prime minister, who came to power in October 2010, of presiding over a “moral crisis”.

Mr Rutte’s full-page ad appeared on Monday in several Dutch newspapers and he gave further details in an interview with the daily, Algemeen Dagblad (AD).

He singled out the case of bus company Qbuzz that was censured by the Dutch human rights institute for turning down an immigrant applying for the job of bus driver because he refused to shake women’s hands. It found that shaking hands was not a key part of the job whereas the man’s freedom of religion was affected.

“I think it’s a bizarre verdict,” he told AD. “Qbuzz is of course absolutely right. Surely a driver can’t say ‘I refuse to shake a woman’s hand because it doesn’t fit my beliefs’?

“That’s precisely why I and many other people are rebelling. Because the norm here is that you shake hands with each other.”

Mr Rutte also complained about anti-social behaviour on public transport and on the streets, but particularly targeted those who refused to adapt to Dutch values, harassed women in short skirts and gay men, and branded ordinary people as racists.

“If you live in a country where you get so annoyed with how we deal each other, you have a choice. Get out! You don’t have to be here!”