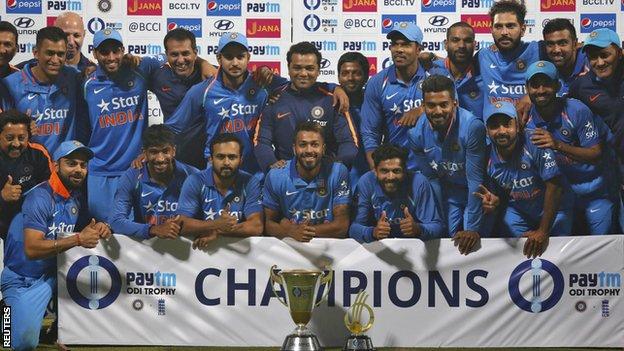 Stokes’ previous game in Kolkata ended with him slumped on the Eden Gardens turf after being clubbed for four maximums by West Indies’ Carlos Brathwaite.

This return was a heroic one as he energised the end of England’s innings with the bat and then took vital wickets with the ball.

England looked set to fall short of a competitive total at 246-6 after 43 overs, only for left-hander Stokes, using his feet and targeting the mid-on area, to blast a 34-ball half-century.

Master run-chaser Kohli was dropped at fine leg on 35 by Jake Ball and looked likely to make England pay before Stokes induced a wild drive and an edge behind.

And when India looked to have reversed the momentum, Stokes returned to bowl the 46th and 48th overs, conceding only seven runs, bowling Pandya and having Ravichandran Ashwin caught at mid-on.

Jadhav close to an encore

In an incredible chase of 351 to win the first one-day international, right-hander Jadhav destroyed England with 120 from 76 balls.

Whereas then he was guided by captain Kohli, here he was forced to do the bulk of the work, first in the company of Pandya, who rode his luck for 56 in a century partnership that came in less than 14 overs.

Short of stature, Jadhav played cuts and pulls, and although wickets fell around him he looked on course to seal a remarkable victory as England’s bowling got ragged, perhaps because of a dew-affected, slippery ball.