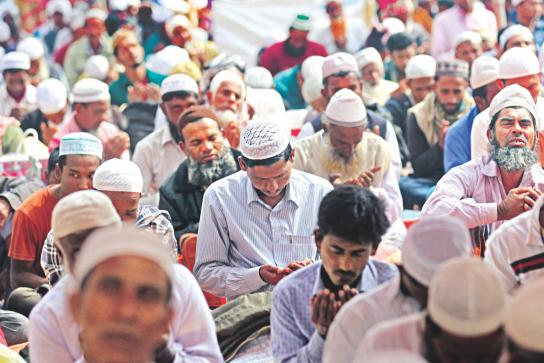 The second phase of Biswa Ijtema, the second largest Muslim congregation after the holy Hajj, concluded yesterday with Akheri Munajat on the bank of the Turag river.

Hundreds of thousands of devotees of all ages spilled over to roads and adjoining areas around the Ijtema venue since early morning. Pin drop silence prevailed at the virtual human sea when the prayer was offered through loudspeakers. Many devotees broke down in tears during the prayer.

During the 32-minute final prayer from 11:11am to 11:43am, Mawlana Saad sought divine intervention in protecting Islam and establishing its teachings in the hearts of all Muslims.

He prayed for honest earning and staying in the path of honesty and also prayed for recovery of those suffering from diseases and for purification of souls of the Muslims at the Ijtema.

Thousands of people also joined the prayer from the rooftops and terraces of nearby houses, roads and open fields. Many of them called their acquaintances from the venue over cellphones so that they could hear the prayer and many attended the munajat through the electronic media.

Vehicular movement towards the venue was suspended from early yesterday. Many devotees walked around three to 10km to reach the Ijtema ground. Many thousands stopped on the adjoining Dhaka-Mymensingh, Tongi-Kaliganj and Abdullahpur-Ashulia roads and joined the munajat from there.

Next year the first phase of the Ijtema would start on January 12 and conclude on January 14 and the second phase would be held on January 19-21.

This year the first phase was held on January 13-15.

Like the first phase devotees from different countries and a huge number of women took part in the Akheri Munajat.

Different kinds of makeshift business establishments were set up around the Ijtema ground like food, old papers and mats to seat, water for ablution, water pots, mobile charger and even space to seat to attend the Akheri Munajat.

Organised by Tabligh Jamaat, the first Ijtema was held in 1946 at the Kakrail Mosque near the Ramna Park in the capital. In 1966, the venue was shifted to Tongi due to an increased number of devotees.