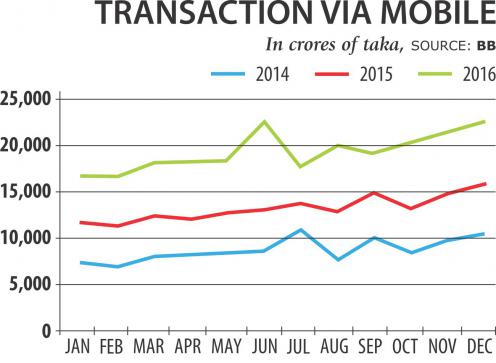 Mobile banking went from strength to strength, with transactions swelling 48.75 percent year-on-year to Tk 234,691.79 crore in 2016, according to Bangladesh Bank.

“This is a very significant growth and we think this growth will continue for the next few years,” said Subhankar Saha, executive director of the central bank.

The BB introduced mobile money five years ago but it was only in the last three years that the market started to come into its own.

“In the last couple of years, we have observed that people at the bottom of the pyramid are also massively taking part in economic activities and that volume is increasing significantly by the day,” said Saha, also the spokesperson for the central bank.

In 2016, about Tk 300 crore was disbursed in salary a month through the platform and more than Tk 200 crore of bills were paid.

“We only use this platform for sending money from one place to another. MFS operators have failed to design any real product.”

For instance, MFS operators do not have any product for farmers and small entrepreneurs; there is no loan or savings scheme either.

“We also found the playing field was not level when it came to regulation. That’s why the sector did not see real investments.”

Of the total transactions, person-to-person money transfers dominated. “This is the main reason why the initiative is yet to be called a success,” Alam added.

In response, Saha said there are about 4.1 crore MFS account holders and 7 lakh MFS agents.

“This is a sign of success. We are in a very good shape,” he said, adding that MFS operators will soon design different products focusing on the bottom of the pyramid.

MFS providers said they are offering mobile balance recharge, merchant payment at shops, salary disbursement and different collection solutions for corporate customers, which have contributed to the growth.

Currently, 19 banks have approval for offering MFS but 17 have rolled out the service so far.

Two leading operators hold around 94 percent market share, according to a survey report run by the BIBM two months back.

As recently as two years ago there were 28 MFS licence holders who were interested in launching the service, according to Alam. But now the number has dropped as the prospect for the industry is bleak, he added.