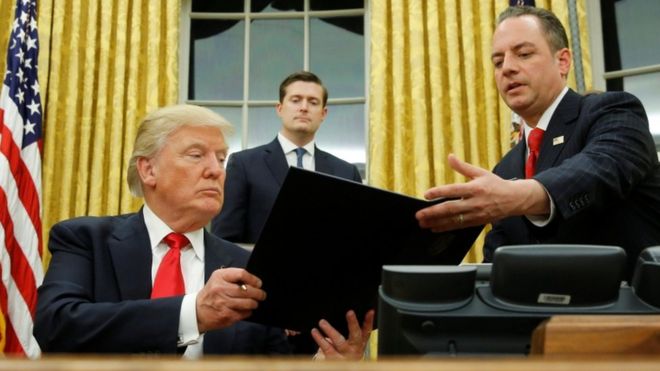 Key figures in Donald Trump’s administration have become embroiled in a fresh war of words with the media.

On Saturday the president had condemned media reporting of the number of people attending his inauguration.

White House Chief of Staff Reince Priebus said there was “an obsession… to de-legitimise this president. We’re not going to sit around and take it.”

Mr Priebus said on Fox News Sunday that the “media from day one has been talking about de-legitimising the election”. He said Mr Trump’s presidency would fight such coverage “tooth and nail every day”.

The latest row was mainly sparked by the inauguration figures.

There were no official estimates. Mr Trump said during a visit to the CIA on Saturday that it “looked like a million and a half people”, but provided no evidence. He called reporters “among the most dishonest human beings on Earth” for saying it was far lower.

His press secretary Sean Spicer outlined figures amounting to 720,000 people in Washington’s National Mall, despite also saying that “no-one had numbers” for the inauguration.

He also said it was the “largest audience to ever witness an inauguration – period – both in person and around the globe”.

Many US outlets, using photos of the National Mall showing the difference in numbers attending the 2009 inauguration and Mr Trump’s, hit out at Mr Spicer’s statements.

The New York Times denounced “false claims” and described the statements as a “striking display of invective and grievance at the dawn of a presidency”.

Both CNN and ABC News went into detail to refute Mr Spicer’s claims.