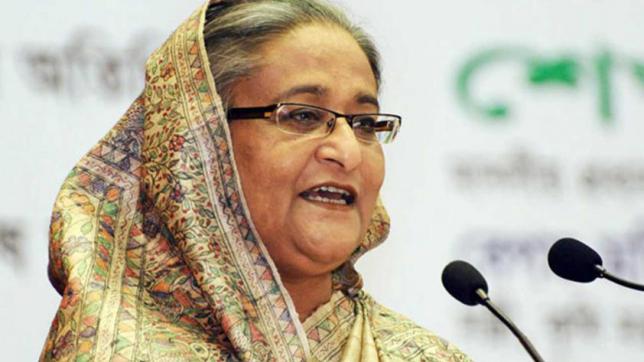 “Bangladesh is moving ahead to emerge as a dignified and self-reliant country in the world. But it is painful to see some local and foreign vested quarters sometimes are engaged in foiling this march forward through various means,” she said.

The premier said this while inaugurating the Police Week-2017 at Rajarbagh Police Lines with the motto ‘Remedy of Drugs and Militancy: Commitment of Bangladesh Police’.

She said the vested quarters have taken the path of terrorism having failed to win the hearts of people in a democratic way.

“Softhearted youths and juveniles are being pushed towards militancy by confusing them in the name of religion. They’re being provided with arms by misinterpreting the religion. They’re provoking them to engage in barbaric activities like killing people through violent attacks,” she said.

Talking about terrorism and militancy, the Prime Minister said these are not only the challenges for Bangladesh alone, these are now global problems.

She directed each and every police personnel to expand their hands of service further with undaunted hearts to help the distressed and helpless people.

The prime minister handed over awards in four categories to 132 police members, including police officers, for their outstanding performance in 2016.

Of the police personnel, 26 got Bangladesh Police Medal (BPM), while 41 President Police Medal (PPM), 24 BPM-Service and 41 PPM-Service award for their bravery and courage in their services in last one year.

Earlier, she reviewed a spectacular parade of different contingents of Bangladesh Police riding an open jeep. She also took salute.

On her arrival at the scene, the Prime Minister was received by Home Minister Asaduzzaman Khan and Inspector General of Police (IGP) AKM Shahidul Haque.

The five day-long Police Week programme also include meetings with the President and the Prime Minister, and holding conference with the Home Minister, annual sports, reunion and annual general meeting of Bangladesh Police Service Association.