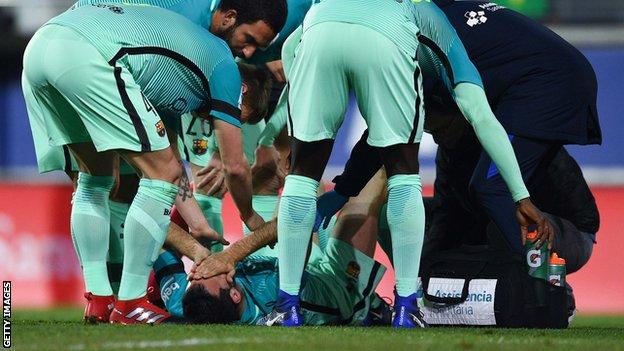 While Barcelona coach Luis Enrique will be pleased with his team’s professionalism in seeing off ninth-placed Eibar, he was less than happy at seeing holding midfielder Sergio Busquets taken off on a stretcher inside the opening 10 minutes.

The Spain international, 28, fell to the ground instantly when an over-the-ball challenge caught him on the right ankle.

He received treatment on the field before being lifted on to a stretcher by medical staff and carried off down the tunnel.

Barca later confirmed Busquets had sprained an ankle ligament and would have more tests on Monday to determine the severity of the injury.

Enrique, who is already without skipper Andres Iniesta through injury, appeared to be positive about the loss of another key member of his midfield trio.

“We leave here with one piece of bad news which is Busquets’s injury although it’s not as serious as we thought,” he said.