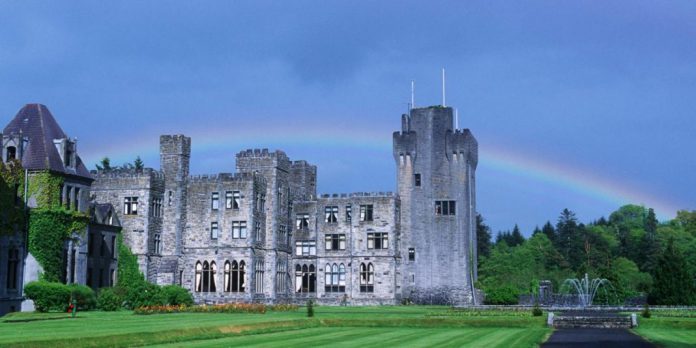 The hawk cocked her head and glared at me, her eyes gleaming golden with determination. She wanted to know if I was serious about the job at hand.

“Just do like I showed you before,” said Joe Healy-Rennison, my instructor and fellow pack member at Ireland’s School of Falconry. He encouraged me in his easy Irish manner, pushing a freshly severed chicken foot into my gloved fist. Then I stuck my left arm straight out to the side, tensing my shoulder as Lima, the beautiful brown Harris’s hawk, swooped down in a gush of wind, lighting upon the edge of my covered wrist. I rotated my hand as her sabre-like beak snapped up the chicken foot. She swallowed it whole, shaking her gullet, then blinked with satisfaction.

We were hunting for small game in the vast forest – some 350 acres of thick woodlands – surrounding historic Ashford Castle at the northern tip of Lough Corrib in western Ireland. As we stepped deeper into the ancient woods, massive tree trunks rose up like Greek columns with a vaulted ceiling of green, heart-shaped leaves. The day was warm and overcast, a dry spell following the wet and gloomy Irish morning.

“Hold onto Lima,” Healy-Rennison commanded, as I tightly pinched the speckle-feathered bird’s jesses, or tethers, under my thumb.

“Now she’s ‘under your thumb’,” Healy-Rennison explained with a smile.

“Quite literally,” I replied, amused to learn the etymology of a phrase that I’ve used for most of my life. Only now I was standing in the place where the phrase was born – in the wet green woods of the Anglo-Irish gentry, with a giant hawk on my wrist, her jesses wrapped around my little finger. “Yet another phrase we get from falconry,” said Healy-Rennison, who advised me to add the extra grip of my pinkie.

Healy-Rennison then covered the bird’s eyes and head with a small leather hood to keep her from distraction until we reached our hunting spot.

“Hence the term ‘hoodwinked’,” he said cheerily, continuing to teach me English – the English of 16th-century falconry, a rare jargon that entered the colloquial, thanks in part to one amateur falconer, William Shakespeare. Experts still argue about how much falconry Shakespeare actually practiced in real life, but he was no doubt personally acquainted with the sport, as his plays carry more than 50 references to falconry.

Macbeth advises “scarfing the eye”, a reference to hoodwinking a falcon to prevent the bird (his lady) from distraction. He continues the falconry metaphor with holding the lady back on her perch while other falcons prepare to “rouse”, or take flight. French terms like “rouse” (from the Old French ruser, when a hawk shakes its feathers) entered English with the Norman invasion of 1066. But it is Shakespeare who helped forge a new meaning: “to rouse” as in “awaken”.

Lima only roused slightly when I removed her hood, fluffing out her feathers before settling back into to her sleek, sharp self. Then she hurled forward, dashing upwards into the highest tree.