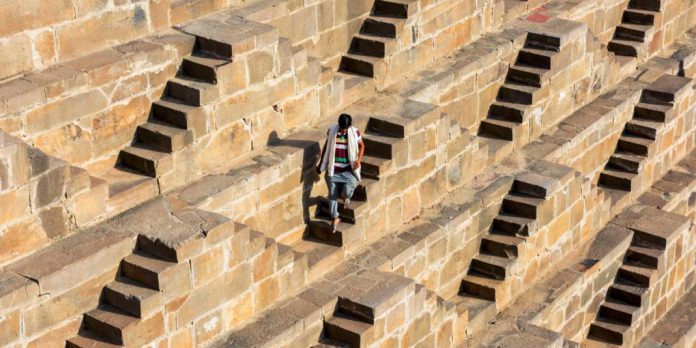 Hidden in plain sight, just minutes away from the bustle of New Delhi’s commercial hub, Connaught Place, is an ancient landmark unknown even to most locals.

Agrasen ki baoli is a 14th-century stepwell (known as baoli or baori), a unique architectural idea that was medieval India’s ingenious answer to perennial water shortage. By creating enormous wells deep below ground, accessed by steps going down as far as 30m, these sophisticated water reservoirs tapped into difficult-to-reach underground water tables, providing a year-round water supply to locals.

As I stood at the top of the 104 steps descending into the depths of the Earth at Agrasen ki baoli, I could see the high-rise city buildings in the backdrop, their white facades presenting a stunning contrast to the russet bricks disappearing into the dark. The steps were enclosed on three sides by tall walls decorated with arches, niches and passageways, none of it giving any idea of what lay underground.

American art historian and archaeologist Victoria Lautman, author of the upcoming book The Vanishing Stepwells of India, described the sensory overload of her first descent into a stepwell: “The contrasts were so pronounced, all my senses were activated: bright light became murky dark, intense heat became cool surrounding air, and the incessant din above-ground became hushed – the deeper I went the more everything transformed.”

While stepwells are largely to be found in the arid north and west of India, they are not unique to those regions. In the country’s south, they take on the form of temple tanks (locally known as kalyani or pushkarani), which fulfilled essentially the same function.

India’s oldest stepwell is believed to date to 600 CE, although most of those still standing were built after the 10th Century. Stepwells proliferated in public areas in towns as well as along important trade routes, and were open for use by the entire community. As such, over time they became a social hub for travellers and for women, who would come to fetch water each day, with fine architectural and design elements incorporated into the basic structure: think graceful arches, handsome pillars and ornate carvings.

Divay Gupta, a leading conservation architect and head of the Architectural Heritage Division of INTACH (Indian National Trust for Art and Cultural Heritage), described them as “magnificent in their conception, their architecture and ornamentation, no less so than the temples and palaces of their times.”

One of the grandest, the Unesco-listed Rani ki vav (vav is the local word in the west Indian state of Gujarat), was built in the 11th Century by the queen Udayamati as a gift to her people. On a cool winter morning, I explored five levels of this massive stepwell with guide Bhupendra Jadeja. Rani ki vav originally goes seven floors down, but the bottom two are currently closed to visitors due to recent earthquakes.

As I took in the exquisite statues lining the walls and supporting pillars, Jadeja shared an interesting use for these places. When women from all over the area congregated at the well, they would exchange gossip about their lives and livelihoods, which was picked up and passed on to the king by his informers: an easy and efficient intelligence network.