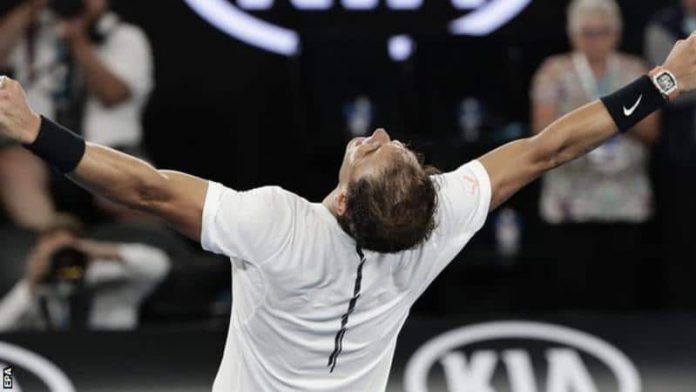 Nadal and Federer both endured five-set matches in their semi-finals.

The Spaniard, 30, has won 23 of his 34 meetings with the 35-year-old Swiss, including an unforgettable victory in the 2008 Wimbledon final.

“People from outside our world talk about this, and that’s good for our sport,” said Nadal.

“The combination of two styles makes the matches really special,” he added.

The head-to-head history also favours Nadal by six wins to two in Grand Slam finals and three to zero at the Australian Open. But the 14-time Major winner says that Sunday’s final meeting will take their rivalry into new territory.

“That was a long time ago. It is a different match, a different moment for both of us. This match is completely different than what happened before,” Nadal added.

“I really don’t think about what happened in the past. I think the player who plays better is going to be the winner.”

Comebacks to the future

Both Nadal and Federer ended their 2016 seasons early after suffering injuries.

A knee problem kept Federer out of action in the wake of his Wimbledon semi-final defeat by Milos Raonic, while Nadal was sidelined by a wrist injury that forced his withdrawal from the French Open.

Federer travelled to Nadal’s home town of Manacor in Majorca for the opening of his rival’s tennis academy in October.

“That was amazing. I have said hundreds of time, but I can’t stop saying thanks because it was very emotional for everybody,” recalled Nadal.

“In that moment, for sure, we never thought that we have the chance to be in a final again.”