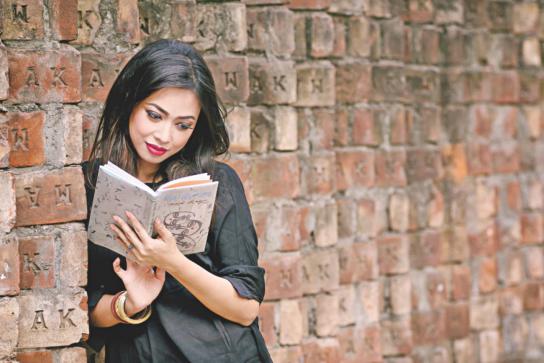 Shanarei Debi Shanu is an actor and dancer. Besides this, the former Lux Superstar is also a poet by hobby. For the first time, Shanu is publishing a book of poetry named “Nil Foring Kabbo” at this year’s Ekushey Book Fair. Publishing house Anannya is bringing out the book.

Shanu grew up in a cultured family. Her father, AK Sheram has been an avid poet for a long time. Shanu used to watch poetry reading gatherings at their home once a week since childhood.

At that time, she also joined the sessions sometimes, where she read her own poems.

During her days in Sylhet, Shanu also wrote for a quarterly magazine, and published other write-ups. The was magazine for kids.

“I have been writing for many years. But after coming to the show business through Lux-Channel i Superstar in 2005, I became very busy with TV shootings and due to this, I could not manage time for writing poems,” Shanu told The Daily Star.

However, she buckled up and started writing poems again in 2016.

Asked about her feelings on her first book, Shanu said “It is like I’m holding a dream of mine in my hand, after receiving the book from Bangabazar.”

“There are 58 poems in the book, and my dear ones have already been informed about it through Facebook,” she said.

Shanu has been regular visitor at the Ekushey Book Fair, and will go this time too, although she will be enjoying it from a different perspective this year.