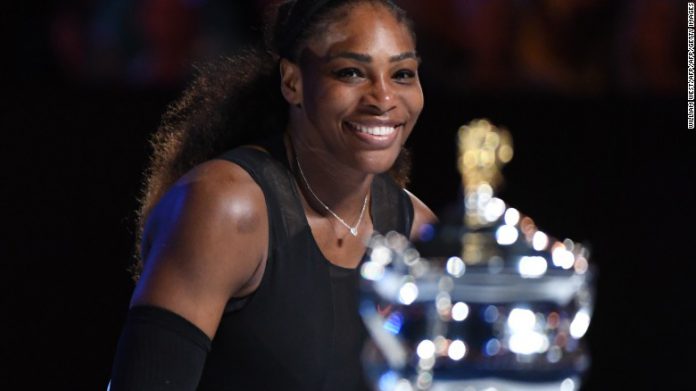 Serena Williams was thrilled to win a record 23rd Grand Slam title at the Australian Open but would not speculate on how many more she could secure.

The American, 35, beat sister Venus 6-4 6-4 to overtake Steffi Graf in the list of Open-era major champions.

She is now just one behind Australia’s Margaret Court in terms of all-time Grand Slam singles victories.

“I never had a number. That’s the beauty of it,” said Williams, who won her first major at the 1999 US Open.

“When I started this journey, I just wanted to win a Grand Slam.

“Then I just wanted to win. Every time I step on the court, I want to win. It’s just really remarkable.”

Williams drew level with Germany’s Graf on 22 major singles titles at last year’s Wimbledon, but then lost in the semi-finals of the US Open.

She won her seventh Australian Open title without dropping a set in Melbourne.

“I’ve been chasing it for a really long time. When it got on my radar, I knew I had an opportunity to get there, and I’m here.

“It’s a great feeling. No better place to do it than Melbourne.”

The experience was all the more special because it was shared with Venus, who at 36 was making her first Grand Slam final appearance since 2009.

The sisters became the oldest women to appear in a major final since the Grand Slams accepted professional players in 1968.

“We’re both, like I say, 30-fun,” Serena joked. “Now I just feel like I’m satisfied with where I am, although I always want to win.”

As well as the title, Serena regained the world number one ranking from Germany’s Angelique Kerber – but she did not know that was on the line as her coach, Patrick Mouratoglou, kept it from her.

“That was a bonus. I didn’t know actually. It feels good. I like being on top, so I really like that feeling,” she said.