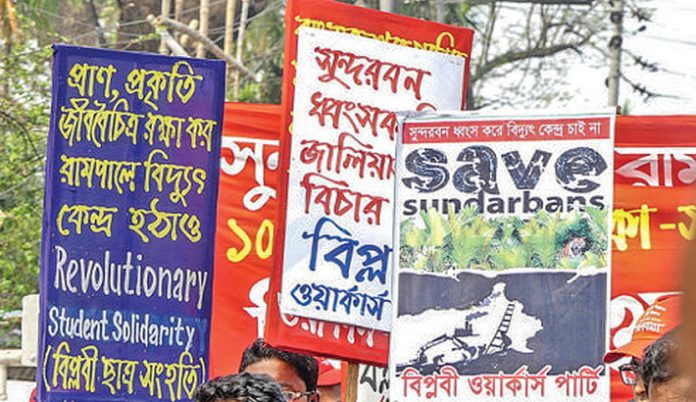 Several hundred newsmen formed a human chain in front of the National Museum demanding justice and that the home minister withdraw the comments he made over the incident.

Many of them covered their faces with black cloth while photojournalists and camerapersons kept their cameras on the ground.

They were holding placards that read: “Protest against brutal police attack”, “We demand freedom of the press”, “Free country, confined media”, “Pen and Camera never bow down”, “We want freedom to write”.

They said the absence of punishment of the perpetrators was the reason behind the recurrence of such attacks.

A group of policemen beat up cameraperson Abdul Alim of ATN News and its reporter Eehsan Bin Didar when they were covering Thursday’s shutdown enforced by the National Committee to Protect Oil, Gas, Mineral Resources, Power and Ports.

The next day, the Home Minister Asaduzzaman Khan Kamal told journalist in Moulvibazar that police do not assault journalists and that sometimes collisions occur which was normal.

Yesterday, the minister at a programme in Tangail said he did not know about the whole incident when he made the comment.

“I was asked suddenly yesterday [Friday] and I was not informed about which journalists were assaulted,” he said yesterday afternoon.

“We got some video clips which are being scrutinised. A probe committee by this time has been formed. Action was taken against a policeman responsible. Everything is going on,” he said adding that police members responsible will definitely face trial.

Manjurul Ahsan Bulbul, president of Bangladesh Federal Union of Journalists, said, “The two journalists were taken inside the [Shahbagh] police station and police officials’ heinous attack was organised. There is no scope for calling it a collision.”

Joint Secretary Shahed Chowdhury of Jatiya Press Club said the prime minister on the first day of Police Week 2017 asked the police to be people friendly. The attack on on-duty journalists without provocation was a burning example of how a section of police ignored her call.

Bangladesh Paribesh Andolon in a press statement also condemned the police attack on journalists and protestors.

The committee organised a rally and brought out a procession in the Jatiya Press Club area.

Addressing the rally, Prof Anu Muhammad, member secretary of the committee, said, “People have the constitutional right to protest if the government is involved in anti-national interest activities.”

“We will also hold protest rallies at all educational institutions across the country on the day,” alliance coordinator Iqbal Kabir said at a press conference held at Madhu’s Canteen of Dhaka University.