Daily Mail 24
22 C
Dhaka
Tuesday, December 6, 2022
Home National How will we tell the government what we think? 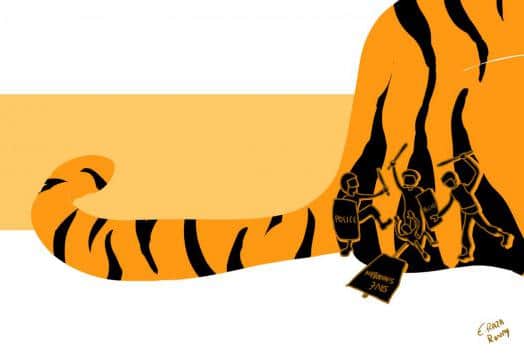 Our nation’s history is strife with examples of our people standing up for what we believe in. From our Language Movement in 1952 to our Liberation War to our struggle for democracy against autocratic rulers, brave souls have laid down their demands and given their lives for it. Now, in 2017, it is shocking that the ruling party finds it in them to crack down violently on people protesting what some think to be a grave threat to our country’s greatest natural resource, the Sundarbans.

In 1987, Nur Hossain, a poverty stricken idealist from Pirojpur was shot and killed at Zero Point during the Dhaka Siege, a blockade demanding the end to the rule of Hussain M Ershad. On his bare chest were the words “Down with Autocracy” and on his back, “Let Democracy be free”. Reflecting on the tragic death of Hossain, Prime Minister Sheikh Hasina in 2012 said “Nur Hossain was standing beside me when we took out our procession. I called him and told him they would kill him for what he had inscribed on his chest. Then he brought his head near the window of my car and said – Apa, you just bless me, I will sacrifice my life to free democracy.”

It’s quite clear that there is a severe dissonance between what the Awami League says regarding our nation’s past struggles and the actions of the party while in power. Last Thursday’s protest against the coal fired power plant at Rampal, to be built 14 kms away from the Sundarbans and carrying the heavy consequence of irreparable damage to a UNESCO World Heritage Site, was largely peaceful, till a violent crackdown was orchestrated by the police against activists and journalists. Over the past year and a half, every protest organised by the National Committee to Protect Oil, Gas, Mineral Resources, Power and Ports has been met with a violent reaction by the government, even though the organisers of these protest marches and sit-ins tried to ensure a peaceful communication of their message. From the police kicking their way into the ranks of a long march all across the country to pelting tear gas shells and rubber bullets at sit-ins in Paltan, the government has been adamant in remaining unresponsive to the calls for dialogue.

Why does the government feel that this violent response is warranted, and the only way to tackle the issue? Perhaps the government has little faith in the vague assurances they give to the general public that Rampal will be safe and environmentally sound. Aside from a lack of transparent, fact-fuelled dialogue between the pro-Rampal government and those speaking out against it, the government has resorted to taking out print ads, hiring public relations representatives and creating promotional videos so detached from reality that they can have their own genre – fantastical disinformation campaigns. The real facts behind Rampal keep being blurred out constantly, as the Environmental Investigation Agency report, which looks at the environmental impact and overall feasibility of the coal power plant, keeps being modified at will, further raising concerns about the transparency of the project.

With the government so worked up about presenting Rampal power plant project in a positive light and going to great lengths in stretching the truth, one has to ask why the necessary space for anti-Rampal arguments is not being provided as well. The reason anti-Rampal protesters are taking to the streets is because there has been no official channel open between the government and opposition to the project, and lack of dialogue has led to a frustrated band of activists who are ultimately forced to call general strikes, long marches and sit-ins. Now that the government has violently clamped down on those methods of protest as well, it is exceedingly clear that the government will not entertain any attempt at calling out the irresponsible decision of building a coal fired power plant next to the Sundarbans. Not only that, the police also seem to be targeting journalists at protests for covering the police action against protesters, which directly challenges the people’s right to know the actions of the government.

Furthermore, the response to police brutality from the government after Thursday’s incidents has legitimised the violence – Home Minister Asaduzzaman Khan’s comment that journalists are never “assaulted” by the police, only “shoving”occurs – gives the police free passes in incidents where they must be held responsible for their actions. This tendency to let the police act with impunity has further choked the voice of the common people, and it is widening the divide between the government and the people it governs.

When there are people who are clearly unhappy with the Rampal decision and their inability to express those views in a meaningful, useful manner take to the streets as a final act of desperation, perhaps the best response isn’t to beat them and journalists covering the chaos to a pulp. If Rampal power plant is decidedly safe and is an environmentally conscious decision, then what does the government have to lose in open debate? The truth, if that’s what the government is bringing to the table, will see the light of day anyway. If the government is not willing to enter into an open debate, what choice do activists and protesters have other than taking to the streets, invoking the same spirit that Nur Hossain had towards restoring democracy?

In fact, we could all take inspiration from the impoverished son of an auto rickshaw driver – if one man’s courage and determination could bring democracy to a nation, a thousand voices asking for the Sundarbans to be saved will be heard as well.