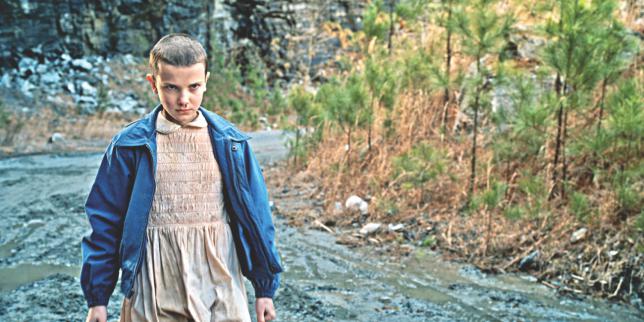 “Stranger Things” breakout Millie Bobby Brown is getting a monster hunter upgrade: from the Demogorgon to the King of Monsters. Legendary has recruited the young actress to star in their upcoming Godzilla sequel “Godzilla: King of the Monsters”. The project is just ramping up, but it’s off to a promising start with “Trick ‘r Treat” and “Krampus” director Michael Dougherty on board to direct from a script he co-penned with Zach Shields.

“Godzilla” is Brown’s first feature role and first major gig after earning a whole lot of love as Eleven in Netflix’s smash sensation “Stranger Things”. Brown earned Screen Actors Guild and People’s Choice Award nominations for her breakout turn as the tiny telepathic badass, in addition to popping up just about everywhere with her adorable co-stars, from on-stage performances to late-night sketches. “Stranger Things Season 2” kicked off production late last year and is slated to return in 2017.

The first “Godzilla” was helmed by Rogue One director Gareth Edwards and starred Aaron Taylor-Johnson, reuniting with his “Avengers: Age of Ultron” co-star Elizabeth Olsen, and Bryan Cranston in a story about the rise of the titular monster to defend humanity against a pair of deadly, radiation-fuelled creatures, dubbed MUTOs (aka Massive Unidentified Terrestrial Organisms). Plot and character details for “Godzilla 2” are being kept under wraps at this time, but Legendary’s Comic-Con sequel announcement teased “more monsters to play with,” fuelling speculation that the sequel might introduce fan favorite ‘zilla rivals like Mothra, Ghidora, and Rodan.

Legendary’s recently dubbed “MonsterVerse” will expand later this year, when Jordan Vogt-Roberts’ “Kong: Skull Island” lands in theatres, reintroducing the iconic giant gorilla to the screen for the first time since Peter Jackson’s 2005 spin on it. “Skull Island” lands on March 10, 2017, and “Godzilla 2” will follow on March 22, 2019, before the big beasties battle it out in “Godzilla vs. Kong” on May 29, 2020.