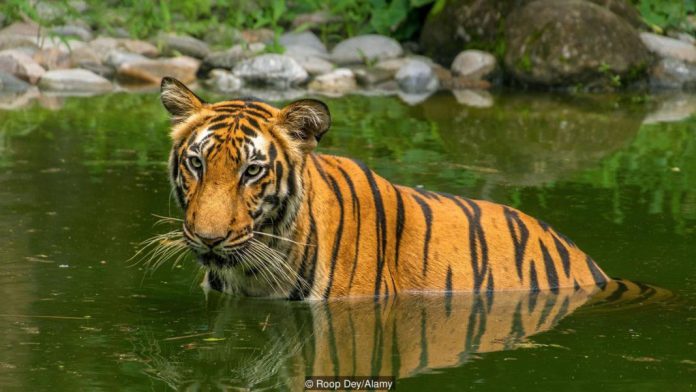 Phoni Gyen took a seat on a dock overlooking the still waterways of the Sundarbans, a low-lying archipelago in the Ganges Delta, and settled quickly into his gory sermon. A wispy grey hairline retreated from a scarred, sun-dyed face, like a litter-choked river exposing a dry, cracked riverbed.

“We’d spent the morning fishing,” he said, his small audience fidgeting in the fierce Bengal sun. “I was on the riverbank when I heard a noise coming from the trees.

“I tried to run, but before I could move it was on top of me.”

A tiger had pounced on Gyen from a nearby palm tree, pinning him to the ground. A suffocating paw compressed his chest and razor-sharp claws tore at his face.

Armed with just a stick, someone from Gyen’s fishing party jumped from their boat and attempted to unclasp the fierce predator.

“The tiger looked at him,” Gyen continued, mopping perspiration from his face, “then it jumped off me, took this man in its jaws and disappeared into the forest.”

I was sure I was going to die.

Tigers are a startlingly common hazard for the people of the Sundarbans, located on the border between southern Bangladesh and the Indian state of West Bengal. Here, a resilient community has made their home among the islands of thick mangrove forests, a Unesco World Heritage Site that’s home to a large population of Bengal tigers, with an estimated 150 big cats active in the region.

I could see the scars from this unlikely domestic arrangement among the small crowd of locals who had gathered with me on the outskirts of Dayapur Village, the entry point to the Sundarbans, to hear Gyen’s harrowing tale.

Sitting next to me was Niranjan, who witnessed a tiger kill his father when he was just 11 years old. Next to him, staring unblinking through bloodshot eyes, was Sunil, who watched a tiger drag his wife from their fishing boat and carry her into the forest.

According to Saptarshi Mondal, a Sundarbans forest guide tasked with helping me explore the relationship between the area’s residents and tigers while simultaneously keeping me from the jaws of one, climate change is heightening the issue, depleting the animal’s traditional food source.

“Already two or three islands are underwater,” he said. “So there is less and less grassland for deer and wild boar [the tigers’ primary food source].”

Consequently, humans, especially fishermen who stray deep into the forest in search of fresh fishing spots, are a good substitute for the tiger.

This historical conflict should foster resentment towards the big cats, yet when I suggested as much to Gyen and his audience, the response was somewhere between bewilderment and mild outrage.

Seeing my confusion, Saptarshi gestured for us to leave; suggesting we talk with someone who could help me understand this dichotomy.

We trudged into the island’s interior, following a scattered brick path past lakes and through paddy fields to a solitary wooden hut. Outside, Kaushalya Mondal, a so-called tiger widow, sat alone in front of a small cooking fire.

“My husband was a fisherman,” Kaushalya explained, two fogged eyes fixated on a bubbling pot of rice. “We were fishing together last year deep inside the jungle when the tiger attacked. It went straight for my husband, pulling him under the water. It carried him into the forest and within a few seconds they were gone. I couldn’t do anything.”

Her anguish evident, I asked Kaushalya if she feels animosity towards the creature that took her husband.

“I do not blame the tiger,” she said. “It was our fault. We went in front of the tiger, not the other way around. I still worship Dakshin Rai.”

I do not blame the tiger… It was our fault.

Dakshin Rai, known colloquially as the tiger god, is a revered deity in the Sundarbans, who, along with the forest guardian, Bon Bibi, is said to protect all of the region’s inhabitants. Before venturing deep into the jungle, honey collectors and fishermen make offerings at one of the deity’s many shrines, hoping to return safely.

Although this reverence towards tigers may be rooted in religious superstition, there is a practical element too.

“The Sundarbans needs its tigers,” Saptarshi said, as we walked briskly back towards the port; light fading, my fear of a fatal tiger attack growing. “Otherwise the forest will not survive.”

The name Sundarbans is said to derive from the endangered sundari tree, a species of mangrove that flourishes within the region. Its hard and fine-grained timber is a desirable material for high-end wood products, including furniture.

“Without tigers [and the government’s enforced protection of their habitat], woodcutters will come and cut down the forest,” he said.

The government’s dedication to preserving the tiger’s homeland also protects the Sundarbans from development, and, increasingly, provides an income through tiger-based tourism.

“The forest gives these people a lot of things,” Saptarshi continued. “It actively combats rising water and acts as a barrier against tsunami and cyclones [which are prevalent in the Bay of Bengal].”

This is why, despite seeing friends and relatives maimed before their eyes, the people of the Sundarbans do not hate tigers.They know their fate is ultimately tied to the killer cats: the tigers protect the forest and the forest protects the people.

After generations of sharing their home with fearsome man-eaters, you’d be forgiven for believing there is nothing that scares these steely communities. But, unfortunately, you’d be wrong.

When Saptarshi and I reached the dock from where the ferry departs to the mainland, the sun stretched lazily towards the water while wind-stirred trees nodded their approval. Nearby, Gyen, alone now, devotedly swept the village’s shrine to Dakshin Rai, for which he was appointed caretaker following his retirement from fishing.

An ominous low rumble shattered the serene scene as a monstrous freighter ploughed into view through the Sundarbans’ silent waters. Plumes of acrid smoke leaked from the tanker, staining the pink-hued sky a molten brown.

Rampal Coal Power Station has been met with universal condemnation by environmental organisations, including Unesco, who labelled it a “serious threat” to the Sundarbans ecosystem.

The organisation’s detailed report claims pollution from coal ash and waste water, as well as increased shipping and dredging, will accelerate the effects of climate change in the delicate region and cause “irreversible damage”.

Dr Punarbasu Chaudhuri, head of environmental sciences at Calcutta University, 70km north of the Sundarbans, agrees with Unesco’s prognosis, and worries about the potential widespread implications of the plant.

“About 2.5 million people are dependent on the mangroves of this region for their livelihood,” he said. “They, the tigers, the vegetation and all animals that rely on the area will suffer significantly if the ecosystem is permanently damaged.

Though Bangladesh government officials maintain the plant will have no detrimental effects on the forest, both Chaudhuri and Unesco conclude that the project should be moved or scrapped completely.

As I boarded the boat back to the mainland, I took one last look at Gyen, now sitting silently on the steps of the shrine. Behind him, a statue of Dakshin Rai snarled eternally, frozen on the cusp of another kill.

While it may be a struggle to fathom how a community can revere a creature that brings such suffering to its people, in many ways it is very apt.

The Sundarban’s tigers, though hazardous, ultimately protect the people’s homeland. Humans on the other hand could soon be responsible for its demise.