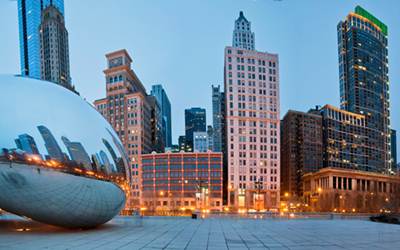 CHICAGO — The violence that plagued Chicago last year has carried into 2017: January ended with 51 murders and 299 people shot — both an increase from January 2016.

This past week, the police department rolled out new strategies to solve the problem.

Just two out of the 25 police districts account for almost a quarter of all shootings in Chicago — gang-infested areas that have defied solution for years.

But those districts are getting some much-needed assistance.

A just-introduced technology called ShotSpotter can now home in on the location of gunfire while simultaneously a second computer system turns on the largest network of surveillance cameras in the country to help locate and search for suspects and victims.

“This technology gives us real-time information,” Johnson said. “It pinpoints where the shot comes from, and we have a five- to seven-minute advantage in terms of responding to it a lot quicker than we did before.”

“The information’s available not only here but also in the vehicles, on these mobile computers and also literally in the hands of the officers on smartphones,” said Jonathan Lewin, a deputy chief of police.

But its long-range impact on the bloodshed remains to be seen.

The Chicago police have worked with officials of the Los Angeles Police Department on implementing the new technology, and they have also reached out to New York for guidance and expertise as well. Chicago had more homicides last year than New York and Los Angeles combined.