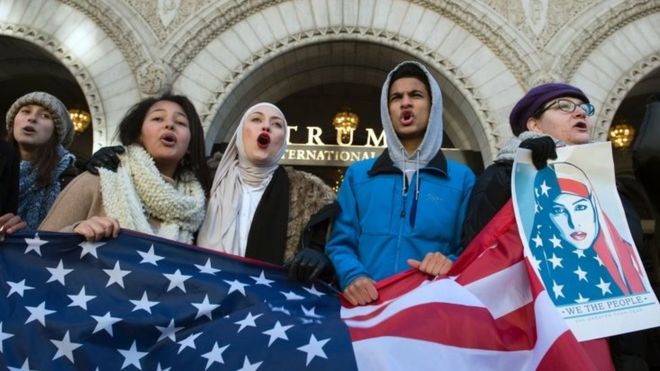 The US justice department has filed a court motion against the suspension of President Trump’s travel ban on people from seven mainly Muslim nations.

The move seeks to reverse Friday’s ruling by a federal judge in Washington state.

Visa holders from the affected nations have been scrambling to get flights to the US, fearing they have a slim window to enter America.

There were further demonstrations on Saturday in Washington, Miami and other US cities as well as in a number of European capitals.

Thousands of people turned out in London, with smaller protests in Paris, Berlin, Stockholm and Barcelona.

Trump supporters staged some counter-protests in the US.

Some 60,000 visas have been revoked since Mr Trump’s executive order was issued.

He found that legal challenges launched by two states, Washington and Minnesota, were likely to succeed.

The directive also suspends the US Refugee Admissions Programme for 120 days, and places an indefinite ban on Syrian refugees.

What is the Trump team doing?
The appeal against the suspension was formally filed by the US Department of Justice on Saturday.

Mr Trump is named as one of the appellants in his capacity as president, along with Homeland Security Secretary John Kelly and Secretary of State Rex Tillerson.

The administration argues that the travel ban is designed to protect the US, and it is seeking an emergency stay that would restore the restrictions.

Meanwhile, the US president raged against Judge Robart in a series of tweets.

“The opinion of this so-called judge, which essentially takes law-enforcement away from our country, is ridiculous and will be overturned!” he wrote.

Mr Trump later added in another tweet: “What is our country coming to when a judge can halt a Homeland Security travel ban and anyone, even with bad intentions, can come into U.S.?”

On Saturday Donald Trump tweeted his disapproval. And tweeted, and tweeted.

He attacked the “so-called judge” who issued the ruling, prompting criticism that he was undermining a co-equal branch of government.

He warned that “many very bad and dangerous people may be pouring into our country”.

And he wondered why lawyers weren’t “looking at and using” the decision of a federal court in Boston that did not suspend the entire order.

On this last point, Mr Trump misunderstands how the US legal system works.

No-one – not even a president – gets to pick and choose which court rulings to listen to and which to ignore.

Rather, appellate courts – all the way to the US Supreme Court – are charged with reviewing the validity of judicial decisions and resolving any conflicts.

Mr Trump’s government lawyers are already setting that process in motion by appealing against the Seattle judge’s decision.

For now, the fate of Mr Trump’s immigration order rests in the hands of the Ninth Circuit Court of Appeals – no matter how many times the president tweets.

What’s been happening since the ban was lifted?
The state department has said it is reversing visa cancellations and US homeland security employees have been told by their department to comply with the ruling.

Customs officials told airlines that they could resume boarding banned travellers. Qatar Airways, Air France, Etihad Airways, Lufthansa and others said they would do so.

Travellers from the affected countries have been trying to use the window of opportunity by boarding US-bound flights on Saturday.

Green Card holder Ammar Alnajjar, a Yemeni national, had to cut short a planned three-month visit to his fiancee in Turkey.

But there were also reports that a number of travellers were not allowed to fly to America.

In Djibouti, east Africa, immigrants from all seven countries on the list were not allowed to fly, an immigration attorney was quoted as saying by AP.