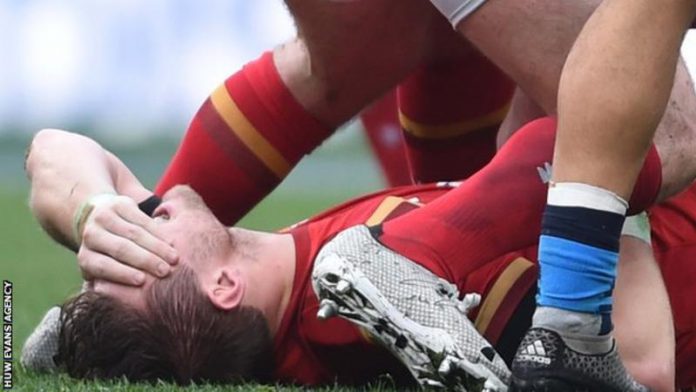 Wales have injury concerns over fly-half Dan Biggar and wing George North before their Six Nations game against England in Cardiff on Saturday.

Fly-half Biggar injured ribs and wing North played on after taking an early blow to the thigh in their 33-7 win over Italy in Rome.

Biggar failed to return after half-time while North played on – and scored a try – in obvious discomfort.

The wing’s 60-metre try in the 77th minute was Wales’ highlight.

Wales have a six-day turnaround before playing England in Cardiff with the visitors having a day extra to recover from their opening win over France.

“George took an early bump, and has a haematoma on his thigh.

“We were happy for him to stay on and he showed some mental toughness which is important in games when you come away from home and we were delighted for him to get over the try-line as well.”

Never miss a Six Nations story – sign up for our rugby news alerts
Wales are hoping to have number eight Taulupe Faletau and lock Luke Charteris available to face England.

Neither player travelled to Rome with Howley confirming they had been working on their fitness in Wales over the weekend.

It was his adventure deep in Wales’ own 22 which set up North’s score and took Howley’s team within touching distance of the tournament’s first try bonus point.

“Sam played particularly well, as we know he can,” said Howley.

But the coach refused to be drawn on whether Davies had done enough to gain selection for England ahead of Bigger if both players are fit.

“We’ll have to see how Dan comes through. Hopefully he and George North will be available for selection,” he added.

Keeping faith paid off – North
North believes the faith they showed in themselves paid off in the win.

Wales ended the first round on top of the table after North followed Jonathan Davies and Liam Williams in touching down amid 30 unanswered second-half points.

“We had to fight to the end, every inch, but we’re happy with the performance,” said North.

“We know they are a passionate team but we backed ourselves and it showed.”

Captain Jones praises Welsh ‘character’
After leading the team for the first time since replacing Sam Warburton as captain, lock Alun Wyn Jones was pleased with his side’s attitude having trailed 7-3 at the break.

“The first half proved how much of a test it was,” said Jones.

“We started slowly but the character showed. We got our foot in the door after the way results have gone.

“We worked a little harder, kept the ball and we came together in the second half.”