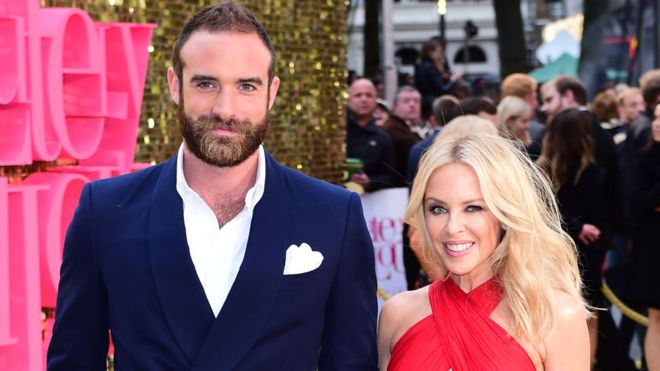 The past seven days in the entertainment world, including Winona Ryder at the SAGs and Ed Sheeran in Liberia.

Stranger Things star Winona Ryder was the talk of the Screen Actors Guild awards on Sunday after viewers picked up on the amusing facial expressions she sported during an impassioned acceptance speech delivered by co-star David Harbour.

Comic Relief launched this year’s fundraising drive by releasing this picture of Ed Sheeran during a visit to the Liberian capital Monrovia. The chart-topping pop star said he was “really proud” to be supporting Red Nose Day on 24 March.

Pop star Kylie Minogue confirmed she and British actor Joshua Sasse had separated. In an Instagram post, she thanked fans for their “love and support” and said she and her former fiance “wished only the best for each other”.

To mark the release of The Lego Batman Movie, British photographer Andrew Whyte released a series of snaps showing London landmarks from the perspective of its Dark Knight minifigure. This image shows the Caped Crusader hanging out with some pigeons in Trafalgar Square.

Actress Bonnie Morgan – aka “Bendy Bonnie” – showed off her contortionist skills at the Los Angeles premiere of Rings, in which she appears as vengeful ghost Samara.

Mosaics by Scottish artist Sir Eduardo Paolozzi went back on display at Tottenham Court Road tube station in London, having been restored as part of its rebuilding works.

Novelist and playwright Stella Duffy was awarded an OBE for services to the arts at an investiture ceremony at Buckingham Palace on Friday.

Hundreds of helium balloons in the shape of speech bubbles – the brainchild of French artist Philippe Parreno – could be found clinging to the ceiling of the Serralves Museum of Contemporary Art in Porto, Portugal.