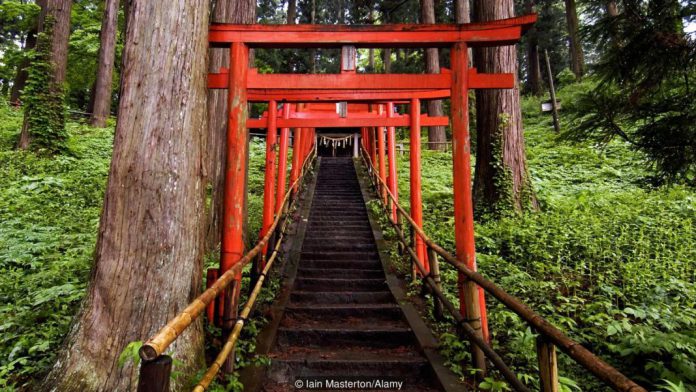 The Places That `Don’t Exist’

During the days of the samurai, Feudal Japan was like Game of Thrones in real life, with countless tales of familial betrayal and revenge, political intrigue and empires won and lost.

That’s why Fujiwara Kiyohira, who lived in Japan’s northeastern region of Tohoku from 1056 to 1128, is especially admirable. Despite losing his father, wife and a child due to treachery, Fujiwara decided to break the cycle of bloodshed and to use his immense wealth for peace rather than warfare.

Establishing headquarters in the village of Hiraizumi, he devoted the last decades of his life to creating a Buddhist heaven on Earth, where the souls of friends and enemies, both human and animal, could find consolation and live in harmony. His son and grandson added to Fujiwara’s vision with even more gardens, temples and pagodas, spreading Hiraizumi’s reputation throughout Japan and as far away as China.

Sadly, that’s where the story ends.

In 1189, after only 100 years of peaceful reign under three Fujiwara generations, the Buddhist utopia was attacked by warlord Minamoto Yoritomo in his successful quest to become shogun and establish his military dictatorship in Kamakura, a town not far from present-day Tokyo.

Over the ensuing centuries, neglect and fire ravaged Hiraizumi’s magnificent wooden buildings. Yet the accomplishments of the Fujiwaras were tremendously influential in Japanese history and never waned in the popular imagination. The heavily gilded Golden Hall, the only structure to have survived intact since the 12th Century, is considered one of Japan’s most significant buildings, on par with anything you might find in Kyoto. In fact, Hiraizumi may well be the most important Japanese village you’ve never heard of.

I first visited Hiraizumi in 2011, about six months after the earthquake and tsunami that obliterated coastal villages in the region and claimed more than 19,000 lives. Huge piles of debris lined the roads on my journey from Sendai Airport, but the mood in Hiraizumi, which suffered no damage, was hopeful. Tourism to Tohoku might have plummeted, but the village had just been recognized as a World Heritage site by Unesco.

The delightfully low-key, tidy town of some 8,000 residents has only a handful of accommodations and few of the tacky souvenir shops that plague Japan’s other celebrity destinations. It is small enough that you can walk, bike or hop on a circular tourist bus to most of its sights – but you won’t absorb Fujiwara’s vision of peace and purity by zipping around in a hurry. That’s because precious little remains from Hiraizumi’s heyday all those 900 years ago, so the only way to appreciate what you see is by imagining how it was and letting the spirit of the place work its magic.

My first stop was the Hiraizumi Cultural Heritage Centre, where I learned about Hiraizumi’s vast cultural and historical significance and the man who envisioned the Buddhist Pure Land. Fujiwara’s personal life is riveting, beginning at the age of seven when his father was executed and his mother was forced to marry into the family of her husband’s murderer. Fujiwara grew up among his mortal enemies, and, years later, after killing a half-brother in revenge for the death of his wife and child, he switched allegiance from regional to Imperial forces and rose as supreme ruler over a vast, remote region rich in gold called Oshu in what is now Tohoku. But when nothing assuaged his sorrow, Fujiwara decided to create a Buddhist paradise on Earth to console the souls of the dead.

His immense accomplishment is immediately apparent at Chuson-ji Temple, once home to more than 40 halls and pagodas and quarters for 300 monks. Today, visitors can explore the main hall for services and rituals; visit a treasure museum housing the temple’s more than 3,000 National Treasures and Important Cultural Properties, including Buddhist statues and burial objects belonging to the Fujiwara lords; and take in a rare, thatched-roof and open-air stage for traditional Noh performances, performed annually during spring and autumn festivals by Chuson-ji’s monks and priests.

But the only structure that remains as it was during Fujiwara’s time is the stunning Golden Hall (Konjikido), completed in 1124. I was initially stunned to discover that the hall is entirely encased inside a concrete building, which severely detracts from its impact and brilliance. But then I learned that the Golden Hall is so revered that it has been protected from the elements ever since 1288, when the very Kamakura shogunate that had overthrown the Fujiwara family erected the hall’s first shelter.

Made of red sandalwood and covered almost entirely in gold leaf, the Golden Hall enshrines Amida, the principal Buddha of the Pure Land, flanked by statues of attendants and with reliefs of peacocks and flowers representing paradise. Silver, ivory, metalwork, mother-of-pearl inlay and Japanese lacquer sprinkled with powdered gold cover the altar and four columns in intricate detail, making the Golden Hall both an artistic and architectural marvel of its era.

My next stop was Motsu-ji Temple, established by Fujiwara’s son and completed by his grandson. It was once even grander than Chuson-ji, with quarters for 500 monks; records from the time declared it unparalleled throughout the land. Alas, only stone foundations remain today, but a huge illustrated map depicts how it might have looked all those years ago.

Here, too, was my favourite place in Hiraizumi, the Pure Land Garden. Remarkably well preserved, and considered one of the finest garden examples from the12th Century, the garden centres on a large pond designed to represent an ocean, with simple landscaping techniques like craggy cliffs, mountains, a curved beach and islands providing visual interest. Starkly unadorned compared to Japan’s traditional landscaped gardens, it was just what I imagined a soothing Buddhist paradise might look like.

Like with most historic places in Japan, I wish I could have seen Hiraizumi at its zenith. Haiku poet Basho, who visited Hiraizumi 500 years after its fall, must have felt the same when he wrote:

But it was a great dream, and astoundingly, in the base of the Golden Hall, rest the mummified bodies of Fujiwara, his son and grandson, as well as the decapitated head of his great-grandson, which was sent to Kamakura by Yoritomo sympathisers as proof of the Fujiwara demise.

And so their remains and legend are preserved in the only structure from the Buddhist Pure Land to have survived all those centuries. If that’s not karma, I don’t know what is.