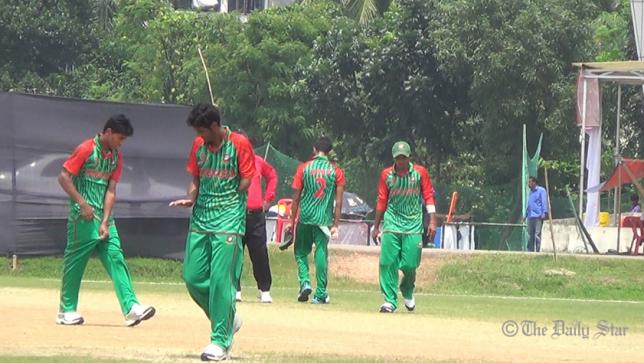 The Bangladesh blind cricket team’s five-game win streak came to an end yesterday as they were defeated by five wickets by their English counterparts in the 2nd T20 World Cup Cricket Tournament for the Blind in New Delhi.

Sent in to bat, Bangladesh were off the pace, scoring at 10.70 runs an over. Opener Abdul Malek scored a 26-ball 51 featuring nine fours, while Tanzjlur Rahman top-scored with a 36-ball 56 as Bangladesh reached 214 for the loss of five wickets.

After the exchange, England put their foot on the gas and overcame the target with two overs to spare. Peter Blueitt scored a 32-ball 68, while Matthew James Page scored 31-ball 54.

Bangladesh remain third in the standings on 15 points, three behind leaders India and equal with Pakistan, who have two games in hand.

With 12 points each, Sri Lanka are in fourth and Australia in fifth, but both have a game in hand and could overtake Bangladesh if they win their next game.

The top four teams will advance to the semifinals.