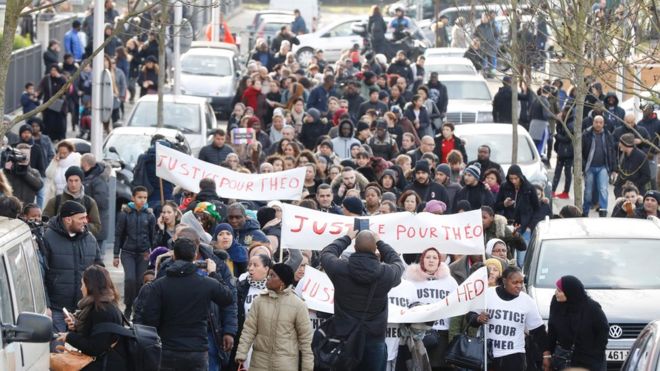 A young black man has given graphic testimony of his alleged rape at the hands of a police officer in a gritty suburb north-west of Paris.

One officer has been charged with rape, and three more with assault.

Hundreds marched in Aulnay-sous-Bois on Monday in support of the man who has been identified only as Theo.

The 22-year-old said he left his house and found himself in the middle of a police identity check, targeting drug dealers, by chance last Thursday.

This story contains details that some readers may find disturbing.

Fears the banlieues could burn again

Who would be a French cop?

The bright side of France’s migrant suburbs

Theo said he was sodomised with a truncheon, as well as racially abused, spat at and beaten around his genitals.

He said the police operation quickly turned violent and he was set upon by four officers. He struggled to make sure he was in the view of CCTV cameras, and asked the officers why they were doing this to him.

He said one officer proceeded to pull his trousers down and rape him with a truncheon.

“I fell on to my stomach, I had no strength left,” he said.

He was then sprayed with tear gas around the head and in the mouth and hit over the head, he said.

Theo was then taken to a police station where he said a “much friendlier” police officer saw his condition and sent him to hospital.

Interior Minister Bruno Le Roux suspended the officers and said the facts of the case must be established with “no ambiguity”.

A lawyer for the officer facing the rape charge said any injury inflicted during the operation was accidental and his client had “never wished at any time to cause any injury to the victim”.

A police union chief, Yves Lefebvre, told AP the rape charge was lodged “to calm or to stop a violent outburst”.

‘Feeling of humiliation’
Unrest was reported in the neighbourhood over the weekend and continued on Monday evening. Reports said a dozen cars were set on fire, rubbish bins burned and arson attempts made on two restaurants. Twenty-four arrests were made.

“The feeling of humiliation is felt by people,” Abdallah Benjana, a former deputy mayor who lives in the neighbourhood, told Associated Press news agency.

“What are [the police officers] seeking? To provoke a spark? Isn’t there enough gunpowder in those neighbourhoods?

“Unemployment, insecurity, high rents… no perspectives for future. They do that to a young man, it can only explode.”

The tensions have revived memories of the 2005 riots around the French capital, when Aulnay-sous-Bois was one of the worst-affected areas.