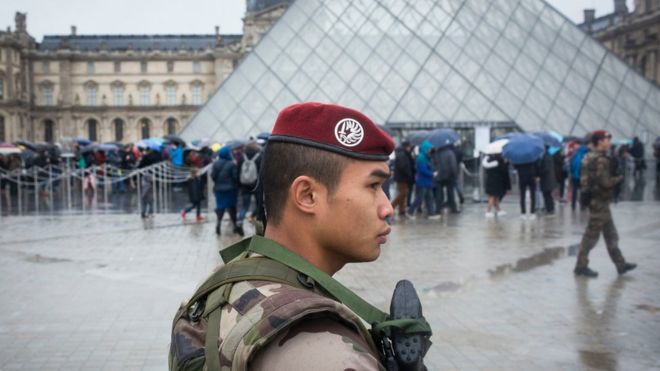 The man suspected of attacking soldiers with two machetes at Paris’s Louvre Museum on Friday has confirmed his identity to investigators and given his version of events, judicial sources say.

After initially refusing to talk, he has confirmed he is 29-year-old Egyptian Abdullah Hamamy.

He was shot in the stomach as, authorities say, he lunged at soldiers.

President Francois Hollande says there is little doubt it was a terrorist act.

His father, a retired Egyptian police general, said his son had not shown any signs of radicalisation, AFP reported.

Reda al-Hamamy said his son was in Paris on a business trip, lives in the United Arab Emirates, and has a wife and a seven-month old son.

He entered France on 26 January on a flight from Dubai and stayed at an apartment costing €1,700 ($1,830; £1,470) a week near the Champs Elysees that had been reserved last June, months before Mr Hamamy applied for his tourist visa in October, a source told the news agency.

He is believed to have bought two machetes after arriving. Cans of spray paint, but no explosives, were found in his backpack.

No group has claimed the attempted attack and no link to extremism was found during a search of the apartment.

However police are also examining Mr Hamamy’s Twitter account after around a dozen messages were posted in Arabic just minutes before the attack.

“In the name of Allah… for our brothers in Syria and fighters across the world,” he wrote, before referring to the so-called Islamic State jihadist group in another tweet a minute later, AFP says.

Hundreds of visitors were inside the museum at the time of the incident and were evacuated.