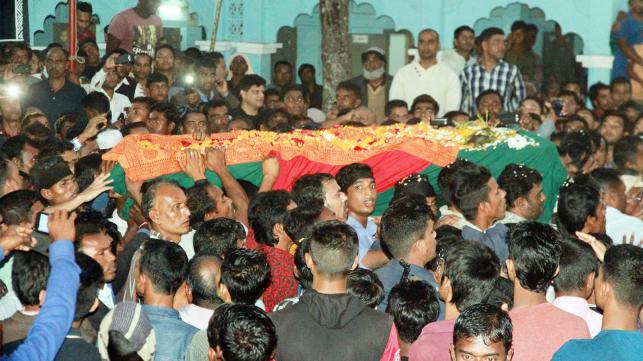 Also a freedom fighter, Suranjit was cremated with state honour.

Earlier, his body was taken to Sunamganj from Dhaka in the afternoon.

A helicopter carrying the body reached Osmani International Airport in Sylhet around 10:35am.

Later, his body was kept at Shaheed Minar in Sylhet city for an hour where local people paid their last respect to the AL leader. Then the mortal remains were taken to Sunamganj by the helicopter.

Suranjit was a member of Awami League’s advisory council.  He was elected member of parliament for eight times in the post-liberation period.

He took over as railways minister and resigned after five months in April 2012. Later, Suranjit was made a minister without portfolio.

Suranjit was a member of 34-member Constitution Drafting Committee, formed after the Liberation War.

He was a commander of Tekerghat sub-sector under Sector-five in Sylhet district as he took part in the Liberation War in 1971 directly.