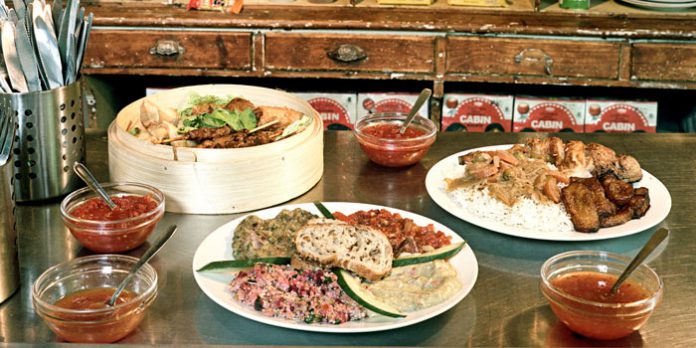 Want to discover the best budget tips for exploring the city of Paris? Sarah Barrell gives us the low down on where to stay and dine in France’s capital

To find innovative, affordable and usually unstuffy dining in the French capital, head to the east of the city.

East is best – the north-east to be precise. Head for the 10th, 11th and 20th arrondissements, just east of the perennially popular but often overpriced Marais district, to find fun and contemporary French food delivered with innovative panache. The east end offers the city’s most unfussy food, but don’t expect handsome Haussmann boulevards. The working-class east end of Paris has long been a ‘drôle mélange’ (funny mix) of Seventies apartments, warehouses and functional shops, and in the Belleville neighbourhood where Édith Piaf was born, it even has its own ‘Cockney’ accent of sorts.

But the ‘bobo’ crowd are encroaching with their ‘bourgeois bohemian’ craft beer, coffee roasteries and offbeat deli-cafés. Add to this the influence from long-resident African and Asian communities, and you have a recipe for a flavour-packed, affordable food experience. Plus cracking panoramic views of the Eiffel Tower and Paris skyline from the hilly heights of the 20th arrondissement.

The French capital has determinedly dusted itself off after the terrorist attacks of November 2015, including the area in the 11th around Bataclan nightclub. Landmark Cambodian restaurant Le Cambodge is open for business again, while the shops and restaurants around nearby Canal Saint-Martin could not be more defiantly full of life. Case in point, Le Comptoir Général, a kooky-cool restaurant/bar/curiosity shop that is as lively for brunch as it is for evening cocktails. Holybelly is the other must-brunch spot, while for classic French pastries, nearby Liberté can’t be beat – it supplies bread for The Sunken Chip, the fab fish & chip shop next door.

Further east, rue de Charonne is where shopping and dining is hipster happening. If you arrive at Charonne’s picture-perfect Boucherie Basque after closing time, don’t fear. Simply buy some of its gourmet carpaccio or marinated bavette (vacuum-sealed) from Paris’s first meat vending machine outside.

Further east still, close to the neighbourhood’s hotel of the moment, Mama Shelter, you’ll find rue des Vignoles and the so-called Îlot Saint-Blaise, a verdant ‘island’ of streets and ivy-clad alleys. These are home to arty, neighbourhood cafés with leafy terraces and some sleek bistros, including La Petite Fabrique (15 rue des Vignoles), where the east end’s food buzzwords (gluten-free, bio) reign supreme but not at the expense of quality, flavour or flair.

Where to eat and drink

This Philippe Starck-designed hotel restaurant is a destination in itself. Its DJ-led nightclub vibe doesn’t detract from the classic French food, playfully reimagined by patriarch Parisian chef Guy Savoy. Don’t miss the deconstructed pissaladière (licence to eat from a tin of sardines at a restaurant table), plus faultless chicken gyoza with a smoky-hot sesame chilli dipping sauce.

For authentic Thai street food, choose this cool corner shop near Canal Saint-Martin – the kitchen is led by a former chef from Bangkok’s Mandarin Oriental. Absolutely do not miss the five-hour sticky pork or the red-hot, red chicken curry. The hatch, serving locals with takeouts, is as busy as the graffiti-decorated, canteen-style eat-in area. Watch this space for a sister address, soon to open in the Bastille’s nightlife zone. Two courses from £9.

Local knowledge
The Metro isn’t always convenient for this part of Paris. Instead use the efficient 76 bus, running east-west along rue de Charonne, connecting the hotel with the Marais and Right Bank in around 20 minutes; 10-ticket carnet, £13.

Where to stay
The east end is blossoming with chic, affordable Airbnb-style apartments, and a tourism boom led by budget boutique hotel Mama Shelter. The vibe is all-out, streetwise fun and the aesthetic urban. The rooms (simple but with wall-mounted iMacs, loaded with useful local food info) come with comfy beds and are supremely good value if booked early: doubles from £98.

How to get there
From £29 one-way by Eurostar, London St Pancras International to Paris Gare du Nord (eurostar.com).

Foodie things to do

Une Glace à Paris is an affordable indulgence. This minimalist temple to ice cream in the Marais has ‘parfums’ so elegant that they could grace Marie Antoinette’s boudoir. Flavours include blackberry, mint & cinnamon and pistachio & neroli.

Marché d’Aligre is a ramshackle wrought-iron indoor/outdoor market on Place d’Aligre (closed Monday). It has superb-value wild game, poultry, cheeses and craft beer, plus a keenly priced oyster degustation stand, and queues out the door for butcher Michel Brunon (famed for horsemeat).

Work up an appetite (or walk off lunch) at Père Lachaise, the city’s largest cemetery, in the leafy heart of the east end, next door to Mama Shelter. It’s the resting place for a hefty list of legendary politicians, painters and musicians – and a tranquil place for a stroll.

Indulge in a guided day out with a difference with Secret Food Tours. With tickets from 89 euros for adults, your Parisienne guide will encourage you to eat your way through Montmarte’s culinary highlights, culminating in a laid-back feast of local cheeses, breads, wine and pastries.

Is there anywhere we’ve missed? Let us know in the comments below…