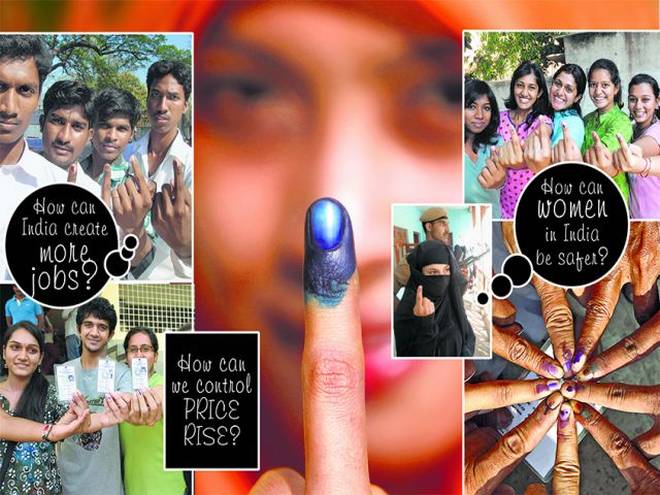 How to ensure that your politicians aren’t making empty promises? Here is a look into an initiative manned by eight alumni from some of our brightest colleges, including the IITs and IIMs.

Rajesh Malviya, a 42-year-old who runs an executive search firm in Mumbai, first heard of AskHOW India from his buddy and IIT classmate, Yogesh Upadhyaya. The initiative — “to improve the quality of public debate in India” — was Upadhyaya’s brainchild. “I’ve known him for 20-odd years,” Malviya told me over the phone. “I wanted to see what he had done.” It was just this idle curiosity that led Malviya to askhowindia.org.s

But soon, it became a habit.

Malviya said that he has become more involved in these coming elections than he was with previous ones. And the AskHOW India website, which is updated every Monday, gave him more to read, in the form of easily understood “info capsules.” This information, Malviya found, helped him participate more knowingly in social media debates. He spoke about a comment thread on Facebook where he countered the claims of Aam Aadmi Party (AAP) supporters who were going on about the Jan Lokpal bill. Malviya argued that to really bring about a change in the way we handle corruption, our judicial system has to be reformed first. Otherwise, the Jan Lokpal bill “will just create another layer of bureaucracy.”

Malviya’s arguments were drawn from an info capsule titled “How can the Justice System be faster?” As of this writing, there are seven other info capsules on the AskHOW India website, including “How can India create many more jobs?”, “How can Women in India be safer?”, and, most recently, “Who will Address my Citizen’s Issues”. The Twitter announcement of the latter was retweeted by Milind Deora.

The idea isn’t new. The “…for Dummies” books, after all, have demystified everything from opera to the Middle East to beekeeping. But the area is. The AskHOW India volunteers – besides Upadhyaya, there are seven, spread across Mumbai, New Delhi and Chennai – pick topics of national importance, research it thoroughly by reading relevant reports and findings of committees and commissions, distil key points, and present them in a series of slides, with PowerPoint-style infographics. (Estimated reading time per capsule: three to five minutes.)

Finally, there is a call to action. The capsule titled “How can we have affordable, 24 hrs Power for All?”, for instance, offers a list of questions you can ask your Lok Sabha candidate. Among them: “How can we supply more coal cheaply to power plants?”

In June last year, Yogesh Upadhyaya did a course in Singularity University, in the Silicon Valley, and he was inspired by how new and exponential technologies are changing the world, by their insistence on dreaming big. “It takes as much effort to run a start-up with a small aim as a big one,” he told me over the phone. “What’s bigger than trying to improve the quality of debate at the national level?”

He was also influenced by PRS (Parliamentary Research Services), the independent research initiative where he is on the Board of Directors. At PRS, they analyse issues, local and global, surrounding every bill that is introduced in Parliament, and produce a concise report that is mailed out to all MPs. The underlying idea is to improve the quality of debate in Lok Sabha. This is what Upadhyaya wanted to achieve with AskHOW India, which he first named Common Minimum Request, because it was about the “minimum” things we need to live.

Navin Boricha, a friend who listened to Upadhyaya’s idea and who is now part of the AskHOW India team (the infographics are done either by him or under his direction), sent Upadhyaya a polite note, later, stating that the name stank. He suggested “AskHOW” and “AskHOW India.” The decision to go with the latter was made easy by the fact that the URL for the former was already taken. “Also,” said Upadhyaya, “just ‘AskHOW’ made the whole thing seem like a DIY kind of thing. ‘AskHOW India’ made it clearer that this was something do with the policy arena.”

Upadhyaya isn’t your typical “corporate type.” He did co-found a software company that makes products for the financial services industry (he sold the company in 2010), but he’s also into improv theatre. He said that he got into it after reading “one of those Malcolm Gladwell-type books. You go on stage. You don’t know how it’s going to turn out. That’s just what it’s like to be an entrepreneur. You know your objective, but how do you execute it? You have to listen to the market and keep changing your plan.”

That’s what AskHOW India has been doing, ever since their Facebook page went up last December (the website went live soon after). They have been listening to comments and suggestions along the lines of “Very informative.. but some slides have too much info in one place + small fonts :-p”. The team replied, “You are absolutely right… Apologies. The information was a lot, so we should have worked even harder on the aesthetics… we’d like to believe that we compromised only this once :-)”. So far, the page has been “liked” by a little over 3500 people, and they have a little over a 100 followers on Twitter.

I met Pramad Jandhyala, a Chennai-based volunteer, over coffee last week. She told me that she first heard of AskHOW India last December, in Goa, during the 20th-year reunion of her IIM-C class, which included Upadhyaya. (The other volunteers are also mostly from the IITs and IIMs.)

“He told us what he was doing,” she said. “The idea was so simple, so appealing, and as a cause it resonated with a lot of us. Our skills are mainly in research and analysis, and we’ve become specialists in our areas. We understand the main issues that are plaguing the nation, and we know that the quality of understanding the common person has is far removed from the reality of the situation. So we said we’ll jump in.”

She explained it this way: The common man reads about multiple sets of issues in the media. He may read, for instance, about free power to farmers. But the bigger issues surrounding power are how you ensure an unlimited supply of fuel, and how you minimise transmission losses. “Politicians, during election time, will come up and say that they will provide us with unlimited power, but there’s no talk at all about how they will go about it. So if citizens are empowered with knowledge and encouraged to ask politicians ‘How will you do it?’, perhaps even on a TV show, then there’s a chance these may not be empty promises.”

Jandhyala is the director of an analytics firm that solves business problems for Fortune 500 companies. The other volunteers, similarly, are secure in high-powered careers. “Except Yogesh, we are all part-timers,” Jandhyala said. “Everybody is working on a fairly limited bandwidth.” She estimates that she spends about 10-15 hours a week on AskHOW India work, during evenings and weekends. “We have fairly demarcated responsibilities. Some of us do content, some do creative, and some communicate with the outside world.” She hasn’t met everyone in the team. (Upadhyaya is the only one who has.) Discussions happen on Google Hangouts and through emails.

Upadhyaya, who is 43, plans to “do this full-time” at least until the elections are over. “Then we’ll have to take stock to see how to keep this going.” Jandhyala said that they were thinking about the possibility of introducing a widget that a reader could click on and leave a question along with a pin code, and AskHOW India would forward the question to the appropriate elected representative.” She quickly added, “One of the things we are aware of is that we may not be able to attribute if change has happened because of us.” Upadhyaya told me, “Of course there is a good chance of failure. But that is another thing Singularity University has taught me, that there is nothing negative about failure.” Then he said, “That does not mean that I don’t feel like Don Quixote once in a while.”