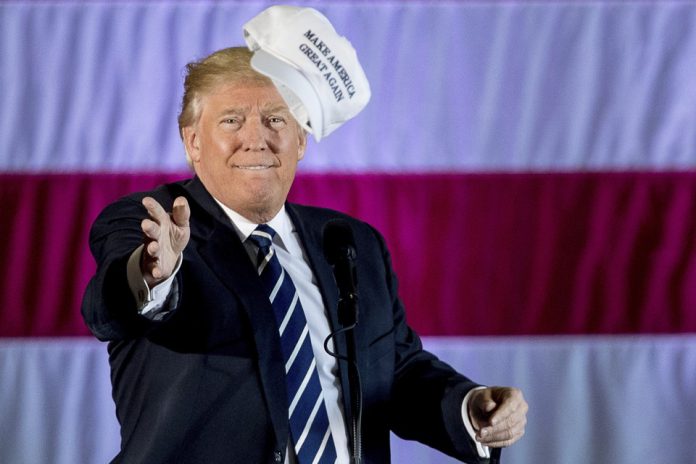 Millions of Americans are worried that Donald Trump is an ominous figure. Investors have another theory: maybe not.

Donald Trump so permeates the collective consciousness of the country that it is hard to imagine now living in a world without him. But there is one place where the president seems to be relatively invisible—the U.S. stock market.

The Dow, S&P, and Nasdaq have set record highs in the months after Trump’s election. On Thursday, the Dow has its tenth consecutive record closing in a row, at 20,810. This is happening, despite the fact that investors seemed terrified of a Trump presidency in the general election campaign. Trump came into office promising to antagonize America’s allies and economic partners while crushing the international establishment. None of this is particularly favorable to multinational corporations. Even worse, Trump’s first few weeks in office were a maelstrom of hasty lawmaking and furious backtracking, exactly the sort of behavior one might consider a threat to the all-important “certainty” that markets ostensibly crave. What’s more, mainstream economists are nearly united in their certainty that Trump’s core policies, like scrapping free trade agreements while severely limiting immigration, would be bad for the country.
Why, then, are investors behaving as though things are looking up?

First, before starting on Trump, one must acknowledge that the stock market’s upswing is nothing new. It is rising now for the same reason it has been rising since 2009, which is that the economy has been sneakily strong. GDP growth hasn’t budged much from its homeostatic 2 percent rate. But unemployment and energy prices are low, and wage growth has been decent for two years. Surely some of the growth in the last few months reflects a confidence that American consumers are doing better with each passing quarter.

Second, the stock market might be rising because investors are paying more attention to the people surrounding Trump than to the president, himself. The federal government looks mostly like a conventionally conservative pro-business institution, if you ignore the idiosyncrasies of the Oval Office. Republicans have promised to cut taxes, particularly for rich Americans and business, and there is broad agreement among the GOP to deregulate the financial and energy industries, including rolling back Dodd-Frank.

After occasionally skewering Goldman Sachs in the campaign, the president has surrounded himself with Goldman Sachs veterans, including Treasury Secretary Steve Mnuchin and the economic adviser Gary Cohn (not to mention Steve Bannon). Little surprise then that Goldman’s stock is up 43 percent since early November, accounting for about a fifth of the entire increase in the Dow Jones average. Perhaps the stock market isn’t a report card on Trump’s brand of populism so much as a hypothesis that it’s a marketing veneer or that pro-business GOP orthodoxy will win out.

Does it make sense to pretend that Trump is a typical Republican—or that the typical Republicans around him will ultimately govern U.S. economic policy? Perhaps. Although U.S. presidents often take credit and blame for the economies that they oversee, they don’t have much direct control over the economy. Macroeconomic conditions and global energy markets are mostly outside of their purview. Meanwhile the power to tax and spend requires Congress. Donald Trump might be the most famous person in the world, but the president doesn’t control the economy.

It’s possible that investors are right and that Trump will either do little to change the upward trajectory of the economy or even that his nativist policies pass (less likely) and boost economic growth (less likely still). But another possibility is that investors are severely mispricing the risk of Trump’s presidency. Stock markets are international clearinghouses of information, but the investing community is an insular bubble itself, often composed of like-minded people following similar narratives and animal spirits. Investors may be herding around the theory that Trump is normal enough, or that his abnormalities won’t have macroeconomic implications.

To oversimplify slightly, you could say that the divide between the apoplectic Main Street and cheery Wall Street is the difference between a Big Trump hypothesis and a Little Trump hypothesis. The Big Trump hypothesis says that the president is a vindictive demagogue and a unique threat to Americans norms and institutions, with the potential to wreak havoc on the country’s politics, economics, and culture.

The Little Trump hypothesis regards these fears and declares: “meh.” Instead, it posits that the president will be a loud yet minor figure, sound and fury signifying nothing; a wannabe superhero hemmed in by the limited powers of the executive branch. Rather than rule like a populist demagogue, he will mostly sign bills written by his pro-business staffers and approved by a pro-business Congress. There are extremely smart people who believe in each hypothesis. But the theories are mutually exclusive. They cannot both be true. No matter what happens in the next few years, a lot of people are already wrong about Donald Trump.