Daily Mail 24
32 C
Dhaka
Friday, September 30, 2022
Home National “we have to put united efforts for our children, for their better... 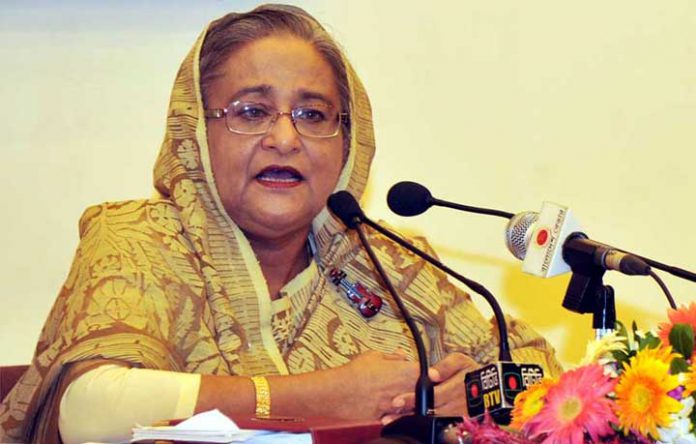 Prime Minister Sheikh Hasina today urged the guardians and teachers to make concerted endeavours to build a generation of good moral character and integrity to prepare them taking future leadership of the country, reports BSS.

“We have to make united efforts so that our children get a better life, have good character and pursue study to become worthy citizens and take the future leadership of the country. Today’s children will be the real citizens to take forward the country and materialise the dream of Bangabandhu,” she said.

Addressing the Independence and National Day rally of children and juveniles at Bangabandhu National Stadium here, the prime minister said, “We have earned independence at the cost of the blood of millions of martyrs.

So we have to get prepared so that none can thwart out our independence and spirit of our liberation war.”

“In south Asia, Bangladesh will be the most prosperous nation and we will able to do this,” Sheikh Hasina said adding today’s generation would build the golden Bangladesh of the Father of the Nation, who dreamt for a poverty and hunger free nation.

Sheikh Hasina advised the children to devote themselves to education seriously and obey their parents and teachers, and never get involved in terrorism, militancy and drug addiction.

“Children should keep in mind that Islam is the religion of peace and fraternity. It never says for killing people. Rather, suicide is a great sin Islam, which would take a person to hell, not to heaven,” she said.

She called upon the spoiled youths to come back to the right path saying the government would do everything for their livelihood. The drive against the militants, terrorism and drug would continue and it would be handled with iron hands, she asserted.

Minister for Liberation War Affairs AKM Mozammel Haq was also present on the occasion held under the auspices of Dhaka District administration. Deputy Commissioner of Dhaka M Salahuddin gave the vote of thanks.

The gallery of Bangabandhu National Stadium was tastefully decorated with portraits of Father of the Nation Bangabandhu Sheikh Mujibur Rahman, four national leaders, Bir Shrestha, photographs of the prime minister and natural beauties of Bangladesh.

Sheikh Hasina said, “Bangladesh would go ahead and none would be able to prevent its advancement. Evil force tried 21 years to suppress the nation but failed. The countrymen are reaping the benefits of the development work which the Awami League government ensured after coming to power in 1996, she said.

Bangladesh is progressing and turned into a role model is different areas. We would build Bangladesh as a prosperous nation by 2021 and it would be a developed country by 2041, she said. Pointing out the education programmes taken by her government for children, the prime minister said the education policy has been framed to make an enlightened society to live amidst world community keeping our head high.

“In view of this, we had announced to make the country digital what we have done,” she said adding that multimedia classroom was set up at schools equipping them with projector and computer lab to groom up children rich in science and technological education.

She said textbooks are being distributed among children free of cost, stipends are being given for studies at secondary to the higher level. Medicare facilities were created in community clinics across the country. Cluster villages were constructed for homeless people.

Sheikh Hasina said Bangabandhu had struggled his whole life for nation’s independence and passed the most valuable time of his life in the prison. Bangabandhu’s struggled began with the language movement and culminated through establishing Bangalore as an independent nation, she said.

Quoting Bangabandhu, the prime minister said December 16, 1971, was the culmination of our fight for political freedom and beginning of the struggle for economic emancipation.

“The struggle for economic freedom is more difficult and time-consuming. However, it’s possible to achieve honestly through united effort and hard labour,” she quoted as Bangabandhu was saying in his address to the nation on December 15, 1974.

Beforehand, Bangabandhu in his historic March 7, 1971, speech called for making every house a fort to resist the Pakistani rulers and gave directives for guerrilla war against Pakistani occupation force. Bengali nation obeyed the order of Bangabandhu and got prepared to take part in the War of Liberation, she said.

Sheikh Hasina said Father of the Nation Bangabandhu Sheikh Mujibur Rahman after his return from Pakistani captivity on January 10, 1972, had given the directive how Bangladesh would go ahead for her prosperity. Bangabandhu also embarked on a massive work for the reconstruction of the war-ravaged country.

Bangabandhu framed Children Right Act, made the primary education
compulsory and complimentary, made the girl’s education free up to secondary level. Bangabandhu framed the country’s constitution in a very short time in which the basic rights of the people were guaranteed, she said.

But, unfortunately, Bangabandhu along with most of his family members were brutally killed, forcing her to live six years in abroad like a refugee with her only sister Sheikh Rehana, who survived the carnage of August 15, 1975, Sheikh Hasina said

After returning home in 1981, Sheikh Hasina said she launched her endeavour to complete the unfinished the tasks of Bangabandhu for the socioeconomic uplift of the country.

“In Bangladesh, no people would remain starved and every child would have the opportunity of education. No people will remain without the own home and lack of medical care. They would get a prosperous life,” she said.

Sheikh Hasina paid glowing tributes to Bangabandhu, four national leaders, martyrs of War of Liberation, all Freedom Fighters and the mothers and sisters who had lost their chastity and suffered immense torture at the hands of the occupation forces during the war time.

The prime minister witnessed the march past of smartly turned out units of school students and took the salute. She also enjoyed the attractive display of the school students on different themes on the War of Liberation.