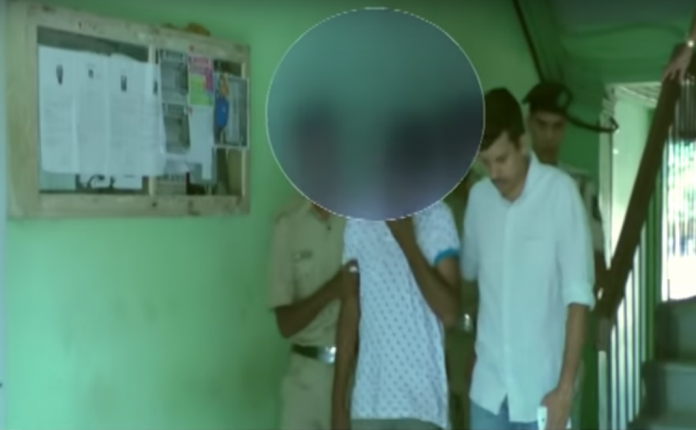 Daylight stabbing that took place in the Goa city, the most shocking incident that took place in the city on Sunday afternoon on the busy M G Road near Peter England showroom situated in the Vaglo Building, on daylight stabbing issue an eve teaser Akram Qureshi was arrested by the Panaji police and sent to the police custody for stabbing the Tourist from Tamil Nadu. This event has raised the concern over the safety of the people in the city, said the sources.

According to the sources, Paul Raj, 28, a tourist from Tamil Nadu was stabbed in the daylight by one of the local rogues who was moving around in the Panaji city under the influence of liquor. The incident took place at around 12 pm on Sunday when the victim came out of the Peter England showroom situated at Vaglo Building on M G Road after doing the shopping.

The accused named Akram Qureshi a resident of Bhatulem in Panaji suburb stabbed the victim Paul thrice in the abdomen and later he widely swung the knife causing more injuries on the victim’s body. Soon he was caught by the people passing by the market and handed over the Panaji police.

According to the sources, the whole issue cropped up when the accused Akram Qureshi started misbehaving with the sister in law of the victim Paul in Panaji market where the family of the victim was doing the shopping at the Garment store situated on M G Road in Panaji.

Akram Qureshi, who was supposed to be in a drunken state while he misbehaved with the sister in law of the victim and stabbed Paul on several times in the abdomen causing him the grievous injuries. The victim had been shifted to GMC (Goa Medical College and Hospitals) immediately after the stabbing incident said the sources.

The victim, who was lying in a pool of blood, survived the attack and is presently at the Goa Medical College and Hospital undergoing treatment, said the sources in Panaji police. The police took the accused Akram into the custody and will be presented before the court on Monday for the remand, said the sources.

According to a complaint filed at the police station, Paul Raj Paneer, a native of Tamil Nadu was stabbed in his stomach when he tried to stop the alleged accused from misbehaving with his sister-in-law. “The victim along with his wife, children, and sister-in-law was returning after the shopping when Qureshi caught hold of his sister-in-law and began to misbehave. Paneer tried to confront Kureshi but the latter removed a knife and stabbed him in the stomach. The passersby caught the accused and called the police,” he said.

The police have registered the case against the accused Akram under various sections including Section 307 (attempted murder), 354 (outraging modesty) and 323 (causing hurt) of the Indian Penal Code. This incident is not a good sign for the people of Panaji as well as the tourists coming to the state as their safety is at stake. There is a need for police patrolling in the city on the regular basis and also the drunkards moving around in suspicious manners needs to be rounded up by the police on regular basis to put stop such incidents in the future.