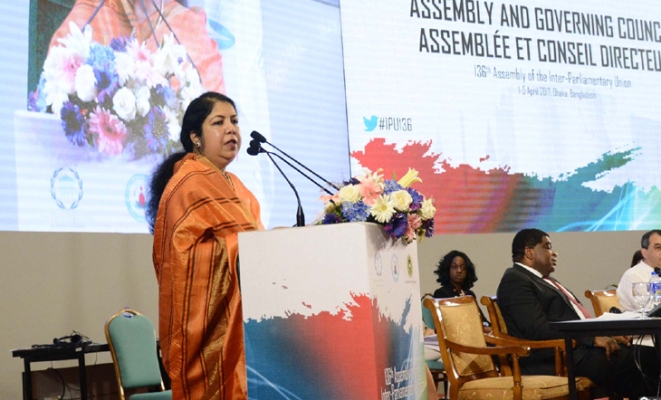 “Extreme inequalities come at a high cost to society, stalling economic growth, undermining the democratic process and social cohesion and increasing risk of violence and security,” the IPU said in its Dhaka declaration, reports BSS.

The century-old global forum having 132 member states wrapped up the five-day assembly with the theme being “Redressing inequalities: Delivering on dignity and well-being for all” taking a resolution to stage its next 137th assemblage in St Petersburg of Russia in October this year.

Bangladesh Prime Minister Sheikh Hasina inaugurated the global event at Jatiya Sangsad premises while the assembly saw induction of Tuvalu and the Central African Republic as new members of the IPU.

The assembly drew 1206 delegates with Bangladesh parliament being the host of the event.

The Dhaka declaration said lawmakers from across the globe identified parliamentary measurers to be taken to ensure economic benefit for all, strengthen protection of worker’s rights and to implement the UN’s Sustainable Development Goals (SDGs).

“We cannot continue to view the gap between rich and poor as business as usual,” IPU President Saber Hossain Chowdhury said in his wrap up address at the assembly.

He said the Inter-Parliamentary assembly was one of many steps needed to be taken to ensure that “the well-being and dignity of all is respected” adding that the IPU was committed to turn the declaration into global reality.

The participants of the assembly adopted a comprehensive resolution on guaranteeing women access to financial mechanisms recommending parliaments to develop specific methods to facilitate the financial inclusion of poor women in particular.

The Inter-Parliamentary assembly observed a minute silence in memory of the victims of the terrorist attacks in St. Petersburg and condemned the chemical attack in the town of Khan Sheikhoun in Idlib province of Syria.

IPU Members drew warring parties’ attention to the ban on the use of chemical weapons by international laws while Chowdhury declared the global parliamentary community’s solidarity with the Russian and Syrian people.

Regarding gender equalities, the resolution said the Forum of Women parliamentarians called for greater empowerment of girls and legal measurers to end gender-based violence and stressed the need to stop early marriage and female genital malnutrition.

The assembly saw Maureen Osoru, a 26-year old Ugandan MP, was elected President of the IPU Forum of Young Parliamentarians.

The event drew 607 lawmakers with 191 being women, 46 parliamentary speakers and 36 deputy speakers.

Jatiya Sangsad speaker Dr. Shirin Sharmin Chaudhury said it was great achievement on the part of Bangladesh as the host of the event successfully said expected it to project Bangladesh before the international community in a different way.

Addressing a media briefing, she said huge participation of the parliamentarians from across the world in the assembly showed their confidence towards Bangladesh’s current democratic environment.

She earlier presided over the concluding session as the Chairperson of 136th Assembly which was addressed by the IPU president and Secretary General Martin Chungong.