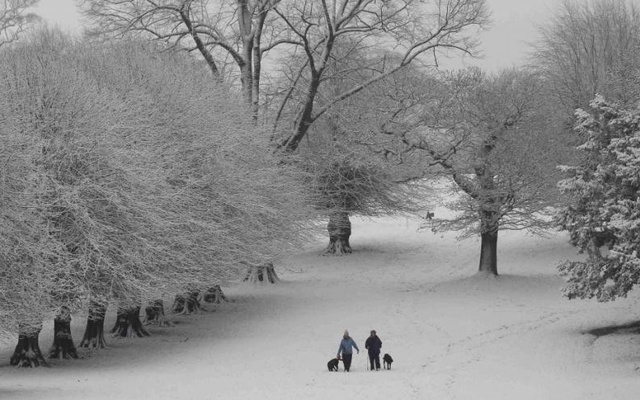 North Atlantic, Here is the long-term weather forecast, in a world in which carbon dioxide concentrations in the atmosphere double: a powerful ocean current called the Atlantic Meridional Overturning Circulation (AMOC) will continue to weaken, and then collapse.

This is the ocean current that takes tropic heat northward, and then grows cold, dives to the ocean floor, and runs southward. And it is the current that delivers the heat that, for example, keeps the British Isles 5°C warmer than their latitude might dictate.

Carbon dioxide absorbs heat reflected from the rocks. And the more carbon dioxide in the atmosphere, the warmer the planet will become.

For two centuries, humans have been burning fossil fuels and putting ancient carbon back into the atmosphere. The average planetary temperatures, so far, have climbed about 1°C.

If CO2 levels double, temperatures will climb a lot higher. For the first 300 years after the carbon dioxide doubling, nothing much will happen. But then there will be a sweeping drop in temperatures over the north Atlantic.

The rain belt will migrate south over the tropical ocean, the sea ice will expand to cover the waters to the south of Greenland, and around Iceland and Norway, and Britain and parts of northern Europe will become much colder.

That is what a new climate model predicts. Scientists from the Scripps Institution of Oceanography, US, and colleagues report in Science Advances journal that the outcome depends on just how computer simulations are framed.

At the moment, the standard climate models predict that the paradox of a colder Europe in a warmer world won’t happen. But the new analysis, the authors say, corrects for biases that predict only moderate changes in what climate scientists call the “Ocean Conveyor”.

“Prominent cooling over the northern North Atlantic and neighbouring areas . . . has enormous implications for regional and global climate change”

And their corrected version suggests a much more apocalyptic outcome: a slow-burning horror story of fire and ice.

“In current models, AMOC is systematically biased to be in a stable regime,” says the study’s lead author, Wei Liu, a Yale University postdoctoral associate who began his research as a graduate student at the University of Wisconsin-Madison and continued it at Scripps Institution of Oceanography.

“A bias-corrected model predicts a future AMOC collapse with prominent cooling over the northern North Atlantic and neighbouring areas. This has enormous implications for regional and global climate change.”

This is the scenario painted luridly in the 2004 disaster movie, The Day After Tomorrow. Although the film is science fiction, scientists have been worrying about the stability of the Ocean Conveyor for at least a decade. The Arctic is warming rapidly, and the consequences for the continents to the south may not be comfortable.

Researchers have offered tentative evidence that the Atlantic ocean current could be weakening. There have been warnings in two studies that Europe, in particular, could see a drop in temperatures.

Right now, outcomes remain speculative, and there are many more factors to be considered. Even in the worst case scenario, the Atlantic ocean current shutdown will not happen for several hundred years.

What the new research really says is that what the computer models predict depends very much on how the data are presented.

Or, in the words of the four authors: “Our results highlight the need to develop dynamical metrics to constrain models and the importance of reducing model biases in long-term climate projections.”