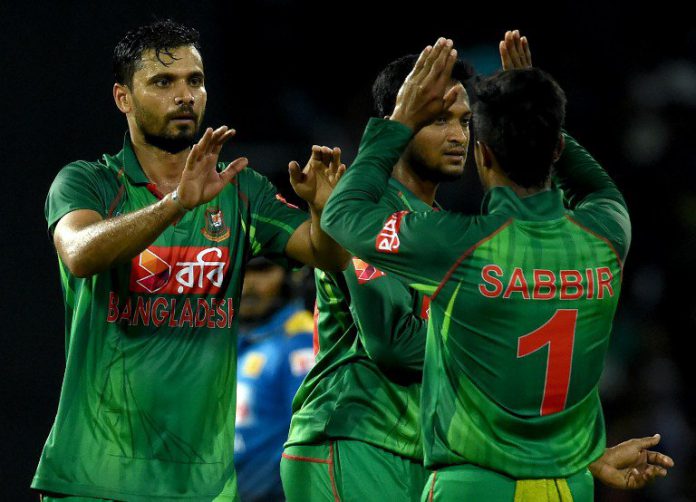 The BCB chief informed that Mashrafe can play ODIs as long as he is fit and that there is no chance of dropping him in the 50-over format.

“Mashrafe is not just a player who can be considered only for his performances with bat and ball. He is beyond that. He has something more special. It is impossible to find another Mashrafe. Be it his leadership quality or enormous contributions for the country or dedication; he is very much rare,” Nazmul told the media at Hotel Taj Samudra in Colombo on Wednesday.

“He is from another level. We will miss him. We might find a good player in future but finding Mashrafe’s replacement will be very tough,” he said.

The BCB boss said they are planning to build a new team ahead of the next World T20.

“Mashrafe would not have made it to the next World T20, so we would have needed a new captain anyway. He would have been unlikely to play for more than 18 months. We wanted separate captains for three formats. We preferably wanted three separate teams with at least four-five specialist players in each format,” he said.

“In a meeting a couple of nights ago, I told the coach (Chandika Hathurusingha) not to disturb the team. I told him to make a parallel team with rising players like [Nazmul Hossain] Shanto, Afif [Hossain], Azmir [Ahmed] and [Mohammad] Saifuddin, and then coach them. Later, we will get them ready in two years. He said he is ready to do so but there is no break of even 15 days in the next two years. But we did find some players like Mustafizur [Rahman], [Mehedi Hasan] Miraz and [Mosaddek Hossain] Saikat in that process, so this was our basic plan – to find new talent.

“I told this to Mashrafe. He has always said this would be his last T20I series as captain, but he wouldn’t be left out of the squad. I met Shakib [al Hasan], Mashrafe, Tamim [Iqbal] and Mushfiqur [Rahim] and told them they have to decide themselves what they want to do, rather than us telling them. Because these players have contributed so much for the team and the country. But Mashrafe didn’t tell us about his retirement at that time. The declaration of his retirement was his decision, but we didn’t know about it.

“I don’t know why he said he has retired, but as far as the discussion we have had, he is in the squad. He would just leave captaincy. He bowled exceedingly well in [Tuesday’s] game, didn’t he? If he is in form and fit, who will leave him? It is a different issue if he doesn’t want to play. There’s no way we told him to go,” he added.

The BCB supremo stated that there is no chance of changing ODI captaincy since Mashrafe will be allowed to play as long as fitness permits him.

“There is no chance of changing ODI captaincy. A year ago, we thought that the [2017] Champions trophy will be Mashrafe’s last tournament. But we think he could play more than that series. He will play as long as he remains fit. There is no chance of dropping him from ODI squad. When he retires from ODIs, we will hope that he will be in BCB as well. That’s our wish,” he said.

The BCB president said all-rounder Shakib is the most likely candidate for the post of the next T20I skipper.

“If Mashrafe had suddenly said he wouldn’t be able to play the second T20I, we would have gone to Shakib for captaincy. It would be the automatic choice. Shakib is the most likely candidate. We always had five candidates and since Mashrafe and Mushfiqur are already captains, we only had Tamim, Mahmudullah and Shakib as the remaining ones. Shakib’s mental attitude and performance show that he has matured, and is a full grown-up. He is ahead of other candidates,” he added