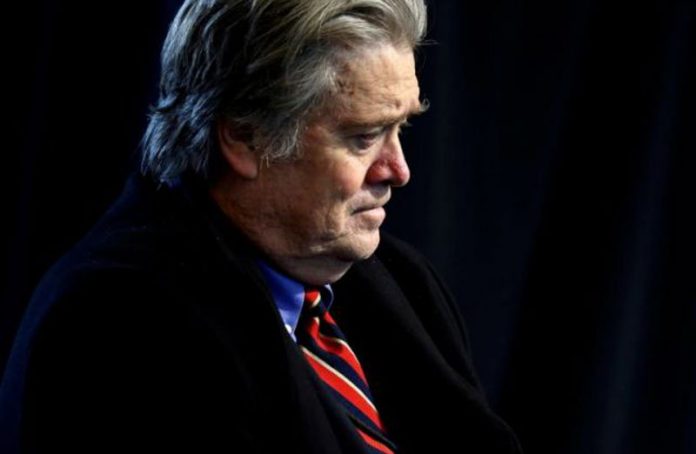 Donald Trump US President has removed his chief strategist Steve Bannon from the National Security Council on Wednesday, reversing his controversial decision early this year to give a political adviser an unprecedented role in security discussions.

Trump’s overhaul of the NSC, confirmed by a White House official, also elevated General Joseph Dunford, chairman of the Joint Chiefs of Staff and Dan Coats, the director of National Intelligence who heads all 17 US intelligence agencies. The official said the change moves the NSC “back to its core function of what it’s supposed to do.”

It also appears to mark a victory for national security adviser HR McMaster, who had told some national security experts he felt he was in a “battle to the death” with Bannon and others on the White House staff.

Vice President Mike Pence said Bannon would continue to play an important role in policy and played down the shake-up as routine.

“This is just a natural evolution to ensure the National Security Council is organised in a way that best serves the president in resolving and making those difficult decisions,” Pence said on Fox News.

Trump’s White House team has grappled with infighting and intrigue that has hobbled his young presidency. In recent days, several other senior US foreign policy and national security officials have said the mechanisms for shaping the Trump administration’s response to pressing challenges such as Syria, North Korea and Iran still were not in place.

Critics of Bannon’s role on the NSC said it gave too much weight in decision-making to someone who lacked foreign policy expertise.

Bannon, who was chief executive of Trump’s presidential campaign in the months leading to his election in November, in some respects represents Trump’s “America First” nationalistic voice, helping fuel his anti-Washington fervour and pushing for the president to part ways at times with mainstream Republicans.

US Representative Adam Schiff, ranking Democrat on the House of Representatives Intelligence Committee, called the shift in the NSC a positive step that will help McMaster “gain control over a body that was being politicised by Bannon’s involvement.”

“As the administration’s policy over North Korea, China, Russia and Syria continues to drift, we can only hope this shake-up brings some level of strategic vision to the body,” he said.
Source: Still Influential

Bannon’s removal from the NSC was a potential setback for his sphere of influence in the Trump White House, where he has a voice in most major decisions.

But a Donald Trump confidant said Bannon remained as influential as ever.

“He is still involved in everything and still has the full confidence of the president but to be fair he can only do so much stuff,” the confidant said, speaking on condition of anonymity.

The White House official said Bannon was no longer needed on the NSC after the departure of Trump’s first national security adviser, Michael Flynn.

Flynn was forced to resign on February 13 over his contacts with Russia’s ambassador to the United States, Sergei Kislyak, prior to Trump’s taking office on January 20.

The official said Bannon had been placed on the NSC originally as a check on Flynn and had only attended one of the NSC’s regular meetings.

The official dismissed questions about a power struggle between Bannon and McMaster, saying they shared the same world view.

McMaster, they said, speaking on the condition of anonymity, also has duelled with Bannon and others over direct access to Trump; the future of deputy national security adviser KT McFarland, a former Fox News commentator; intelligence director Ezra Cohen-Watnick, a Flynn appointee; and other staffing decisions.

Donald Trump is preparing for his first face-to-face meeting on Thursday and Friday with Chinese President Xi Jinping with the threat of North Korea’s nuclear and missile programs a key component of their talks.

Bannon’s seat on the NSC’s “principals’ committee,” a group that includes the secretaries of state, defence and other ranking aides, was taken by Rick Perry, who as energy secretary is charged with overseeing the US nuclear weapons arsenal.