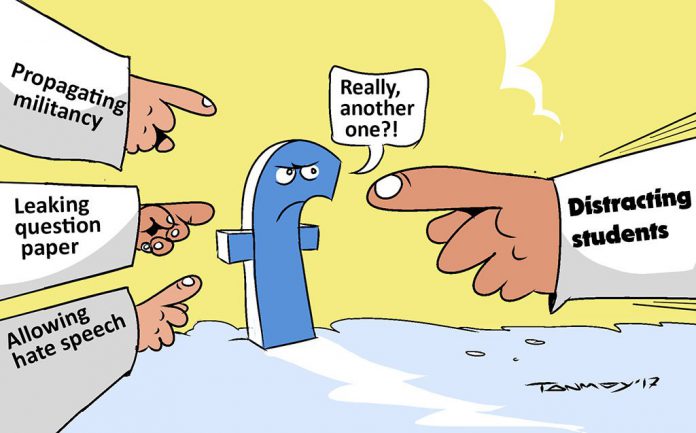 Everyday in Every way i am feeling better and Better.

Facebook issue: Industry insiders speculate about the impact the government’s proposed six-hour block of Facebook would have on the country and on local businesses

If the government’s plan to block this popular social media site for a few hours every day is ever instituted, its vision for Digital Bangladesh will be hampered, say industry insiders.

The Cabinet Division has sought the Bangladesh Telecommunication Regulatory Commission’s (BTRC) opinion regarding a proposed plan to shut down Facebook for six hours every night starting 12am, since the use of the social networking site is apparently having a detrimental effect on students by distracting them from focusing on their studies.

E-commerce Association of Bangladesh (e-CAB) President Razib Ahmed said: “This proposal to block Facebook for six hours every night will definitely inhibit progress in terms of attaining a fully digital Bangladesh by 2021.”

“Irrespective of whether the government shuts down Facebook for whatever amount of time, users will simply shift to using other mediums for communication and entertainment,” he added.

According to the e-CAB president, e-commerce businesses on Facebook experience a large amount of traffic at night and most of their business transactions are carried out then as well and a move like this would cause them to experience huge losses.

As more and more Bangladeshi businesses are taking to using the social networking giant to expand their reach and to better connect with their consumer base, a shutdown of Facebook, for however short a while, will be disastrous not just for the individual businesses, but for the country as well.

A recent study states that e-commerce and F-book commerce, or F-commerce, businesses earn over Tk200 crore per month and about 30 percent of local businesses are currently Facebook-based.

Previously, in November 2015, the government had blocked the site in the country for three weeks after the death penalties of war criminals SQ Chowdhury and Ali Ahsan Mohammad Mujahid had been upheld by the Supreme Court. F-commerce entrepreneurs turn despondent when recalling that time since they had all suffered massive losses back then.

E-CAB president Razib suggested that perhaps rather than blocking this site, the government could instead focus on generating greater awareness of the downsides to overusing the social network.

A former president of Bangladesh Association of Software and Information Services (BASIS), Fahim Mashroor, said: “I personally believe that Facebook is an unproductive way for children to spend their time, especially since we have failed to create useful local content. If we could do so, the children would be able to use the platform in a productive way.”

Despite the pros and cons to taking a short hiatus from Facebook, the bottom line seems to be less about the students and more about future of the country’s businesses. One point that everyone seems to agree on: a move like this would cause massive setback for Digital Bangladesh.