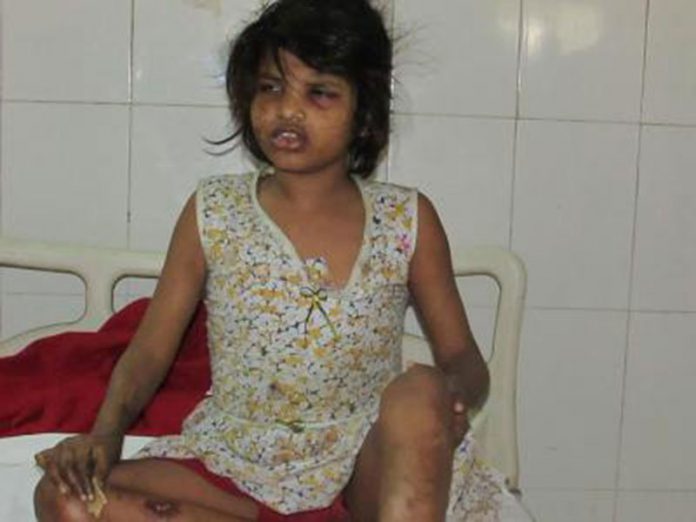 A girl has been found living in the jungle with a troop of monkeys in a remote nature reserve in Bahraich, northern India.

The eight-year-old can neither speak nor understand any language. It is unclear how she ended up living with the monkeys or for how long she has been with them.

She is being called “girl mowgli” — after the wolf-raised protagonist of Rudyard Kipling’s The Jungle Book.

Villagers first spotted her in January foraging in Motipur range of Katarniaghat Wildlife Sanctuary close to the Nepal border, reports to Indian Media

She was naked, her hair was matted and she had claw-like nails and seemed comfortable with the apes.

Bahraich Sub-Inspector Suresh Yadav located the emaciated girl during a routine patrol. Motipur police Inspector Ram Avtar Singh said it looked like she was abandoned by her family.

“She was terrified of us. girl mowgli was frail and starving,” he said. “If we hadn’t rescued her she could have been eaten by other animals.”

Police managed to rescue her after great efforts and admitted her to the Bahraich hospital about two months ago, Indian Media reported.

Additional Superintendent of Police Dinesh Tripathi said she had wounds on her body. “Our priority is to give her proper medical care and look for her parents,” he told HT.

Hospital staff, teaching her to be human, affectionately calls her “girl Mowgli”.

Chief medical officer DK Singh said she behaved like animals with whom she had spent many years.

She has managed to overcome her fear of humans a little but often gets violent. She prefers screeches to express herself and walking on all fours.

“Now she understands signals and is able to identify the ward boy, nurse and other medical staff. It seems the girl had been abandoned in the forest area at an early age,” he said.