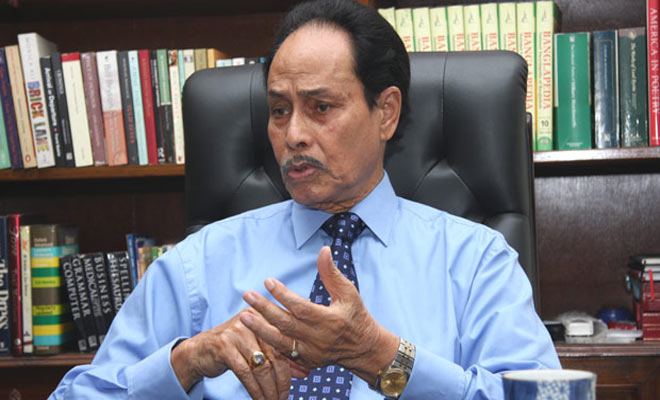 HM Ershad Former military dictator and Jatiya Party Chairman has announced that he will form a grand alliance of 30 political parties.

“The government of Sheikh Hasina has been working for the development of the country. Though we have different political ideologies, we are on the same page regarding development,” Ershad said at the party’s Bhola district council on Bangla School ground Friday.

“We have the same aim – the development of Bangladesh and its countrymen. So, we will work together to lead the country towards prosperity.

“Creating a new alliance does not mean it will be against the government,” said Ershad, now a special envoy to the prime minister.

“Once upon a time, Jatiya Party was a strong political party like the Awami League. We want to make it strong again,” the Japa chairman said.

“I want to see my party in power before I die.”

His party is considered as the opposition in parliament, though some of his party colleagues are also members of the Cabinet.

After a Praesidium meeting on March 24, HM Ershad said that the Japa would form an alliance with two small political fronts. Party sources say the alliance may comprise some religion-based parties including Islami Oikya Jote, Bangladesh Khelafat Majlish and Nizam-e-Islam Bangladesh, and some other small parties.

Ershad had introduced state religion in the constitution in 1988, and in 2013 he actively supported the 13-point movement spearheaded by Qawmi madrasa-based radical Islamist platform Hefazat-e-Islam despite being the key ally of the 14-party alliance.

He took blessings of Hefazat chief Ahmad Shah Shafi, who campaigns for Shariah law in the country, during a visit to Hefazat’s Hathazari madrasa in Chittagong before January 5, 2014, elections.

Regarding BNP’s politics, Ershad Friday said: “They tortured and burned people to death. We do not want such a party in the power. Rather we will support the government which will work for development and stand beside people.”

Japa Secretary General ABM Ruhul Amin Hawlader said: “Today’s rally has proved that people of Bhola have not cheated with HM Ershad, though some politicians did.”

With Japa district unit Convenor Kefayetullah Nazib in the chair, the programme was also addressed among others by State Minister for Local Government, Rural Development and Cooperatives Mashiur Rahman Ranga