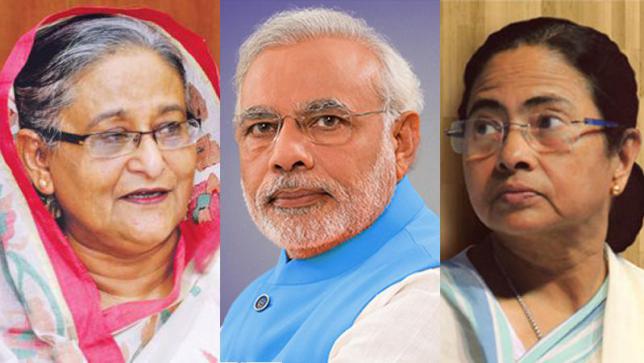 Mamata Banerjee, The way spoke to Sheikh Hasina about resolving Teesta issue exposed a wide gap between her assurance and actions.

While speaking at a view exchange meeting on February 20, 2015, in Dhaka, she made the assurance with some powerful words like– “Please keep faith in me”, “Don’t’ worry about it.”

But at a meeting with Hasina on Saturday in Delhi, she was unmoved as Bangladesh PM apparently tried to persuade her to agree to the Teesta water-sharing deal.

The West Bengal chief minister brushed aside any prospect of inking any deal in near future over Teesta water as she said there was no water in the Teesta River to spare for Bangladesh.

How will Modi manage an adamant Mamata to agree with him to resolve Teesta issue as per his pledge to Bangladesh?

Modi’s predecessor Manmohan Singh had made much progress to resolve the Teesta issue. Both Delhi and Dhaka were about to sign a deal about it. In September 2011, Manmohan was expected to make a major announcement on the sharing of the water of the Teesta during his visit to Dhaka.

But Mamata frustrated all hopes. She pulled out of a delegation to Dhaka led by the then PM Manmohan. She claimed that the pact would harm the interests of the people of North Bengal through which Teesta flows.

Her move had embarrassed Manmohan Singh and forced him to drop the pact. It was also embarrassing for Sheikh Hasina who was then Bangladesh PM.

Mamata’s visit to Dhaka in February 2015 however raised hope over resolving the Teesta issue ahead of Modi’s visit to Bangladesh in the same year.

Her strong words pledging to resolve Teesta issue signalled a change of her mind.

But she did not keep in mind what she said in Dhaka to negotiate with the Modi government in the centre in India.

Her all good words appeared as political rhetoric as she did not give consent to Modi to go ahead with the Teesta water sharing deal during his visit to Dhaka in June 2015.

“There will be no deal on Teesta during the coming visit because we have to take the state [West Bengal] government on board for this,” India’s External Affairs Minister Sushma Swaraj told a press conference in New Delhi before Modi’s visit to Dhaka.

“We have not reached a position for the signing of the Teesta pact. Any understanding between governments of India and Bangladesh will not be enough as no decision is possible without consulting the state government,” Swaraj said.

Swaraj, however, said the process of taking the state government on board for the Teesta deal was on.

After two years, the process initiated by the Modi government of taking Mamata on board for the Teesta deal has made little progress.

Rather, Mamata’s statement that there is no water in Teesta to spare for Bangladesh seems to have diminished prospect for resolving the issue in near future.

Now, the onus lies on Modi to break the stalemate and to implement his pledge to Bangladesh.

Given the previous records of the acrimonious relation between Modi and Mamata, this may not be an easy task for Indian PM. Yet, his success will fulfil his pledge to Bangladesh. And his failure will put him in the same bracket of Manmohan Singh who faced an embarrassing situation in 2011 for Mamata.