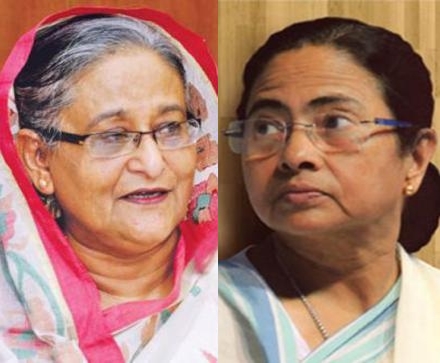 Mamata: if Teesta water is shared West Bengal itself will be in problem, Teesta is the lifeline for the northern part of West Bengal

The two leaders had an hour-long meeting from 9:15 pm BST at the Rashtrapati Bhavan in New Delhi yesterday.

Coming out of the meeting, Mamata told journalists that there was no water in the Teesta river to spare for Bangladesh and proposed the country use the waters of five common rivers — Torsa, Dharala, Jaldhaka, Dansiri and Mansiri — to meet its requirement.

“I always want Bangladesh to get water. But we have a problem with the Teesta water because the water supply in the river has gone down and I myself saw this a few days ago.

“Teesta is the lifeline for the northern part of West Bengal. There will be a problem of water for drinking and irrigation purposes if Teesta water is shared. At times, it becomes difficult to run a power plant with Teesta water,” Mamata said.

She added, “I understand Bangladesh’s water needs. Whenever Hasina comes to India, she talks about Teesta Treaty. I have given a proposal to Bangladesh and federal Indian government today both at the lunch and again tonight that Bangladesh may consider using the waters of rivers like Torsa, Dharala, Jaldhaka, Dhansiri and Mansiri.

“If necessary, the two sides can conduct a joint survey on the availability of water in the five rivers I mentioned,” Mamata added.

She also said as the Calcutta Port was facing a lot of problems due to the Farakka barrage, West Bengal could not afford problems in Teesta water availability.

Mamata said the five rivers may be small but have enough water round the year and “I told Hasina to consider using the waters of these rivers to meet her country’s requirements.”

On Friday, Hasina had said that it would be good if she could have a separate meeting with Mamata on the Teesta issue.

The Teesta deal was set to be signed during the then Indian PM Manmohan Singh’s visit to Dhaka in September 2011 but had to be scrapped at the last minute due to Mamata’s objections.

Teesta water is crucial for Bangladesh especially in the lean period from December to March when water flow temporarily comes down to less than 1,000 cusecs from 5,000 cusecs.

Hasina came face to face with Mamata at a luncheon hosted by Modi for her and at a dinner by Indian President Pranab Mukherjee yesterday.

The Bangladesh PM, currently on a four-day state visit to India, is staying at the Rashtrapati Bhavan, the official home of the Indian president.