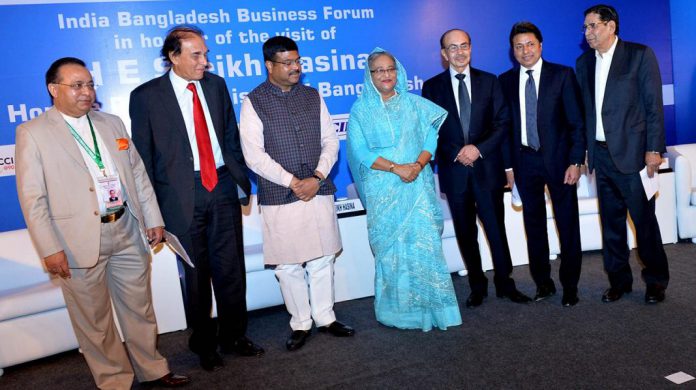 Indian Leading companies today signed 13 MoUs with Bangladesh and agreements for electricity, oil and gas projects, including the controversial Rampal thermal power plant, worth over $9 billion aimed at deepening the bilateral economic partnership.

The deals were signed in the presence of Bangladesh Prime Minister Sheikh Hasina at a meeting of India-Bangladesh Business Forum in New Delhi.

The deals include: a facility agreement between Bangladesh-India Friendship Power Company (BIFPCL) and Exim Bank of India for debt financing for construction of 1,320MW Maitree Power Project in Rampal of Bangladesh at a cost of $1.6 billion.

The location of the thermal project near the ecologically-sensitive Sundarbans area has triggered an outcry among environmentalists in Bangladesh.

The MoUs include an implementation and power purchase agreement between Reliance Power and the Ministry of Power, Energy and Mineral Resources for the first phase (718MW) of the 3,000MW power project at Meghnaghat, entailing $1 billion (out of a total proposed investment of $3 billion).

The development came following meetings with the high-powered Bangladeshi business delegation accompanying Hasina on her four-day visit to India.