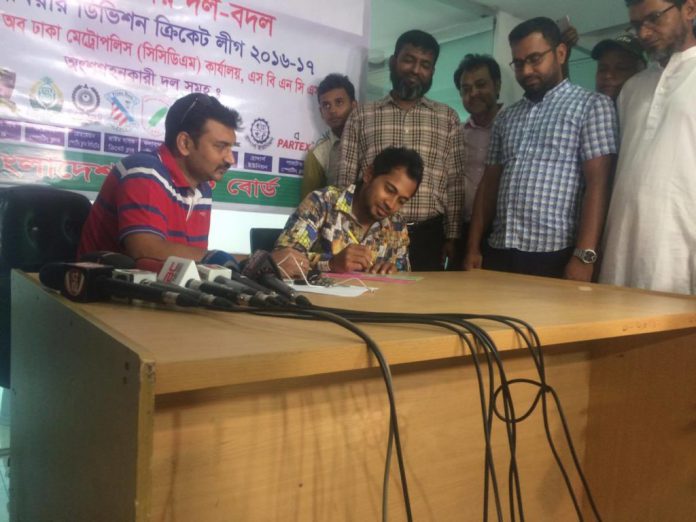 Test captain of Bangladesh Mushfiqur Rahim will play for Legends of Rupganj in the upcoming Dhaka Premier League as the wicket-keeper batsman completed the transfer formality at the Cricket Committee of Dhaka Metropolis office at the Sher-e-Bangla National stadium yesterday.

The 29-year-old Mushfiq who played for Mohammaedan Sporting Club last season will be able to play not more than five games for his new club as the national team is expected to fly for England on April 26 for a training camp ahead of the Ireland tour and followed by the ICC Champions Trophy.

However, according to Test captain Mushfiq, the DPL has always been the most important tournament of the country and informed that there is still a lot to contribute for the club.

“It is a new challenge every year. My club has a target, which I will try to fulfill and also have my personal target. We have a good mix of senior and junior cricketers. If we can perform in the field, we will definitely do well.”

“Most of the Bangladesh players will be unable to play the whole league. But we have a lot to contribute to the club. The way we are playing for Bangladesh, we should have the same consistency in the domestic scene. It is an important tournament. I will try to keep the professionalism,” said Mushfiq to the media.

He added that the national cricketers have a responsibility to set a standard when it comes to perform in the league and when asked whether there is some extra pressure this season on him, Mushfiq informed there is always expectations from the senior players.

“If it is not enough that I have been trying to prove myself for the last 11 years, it becomes difficult. Our job is to perform, so that it benefits the team. Every team management would want the best from their players. It is in the back of my mind, and I will always ensure that I perform well. I have to do well for the club and country. I always try to stay in team through performance,” he said.

Mushfiq will play alongside the Tigers ODI captain Mashrafe bin Mortaza in the same team for the first time in DPL informed that he is looking forward to make his DPL experience memorable.

“This is my first time to play with a player like him. It is my privilege. I hope it remains memorable, and I hope to perform well,” said Mushfiq.