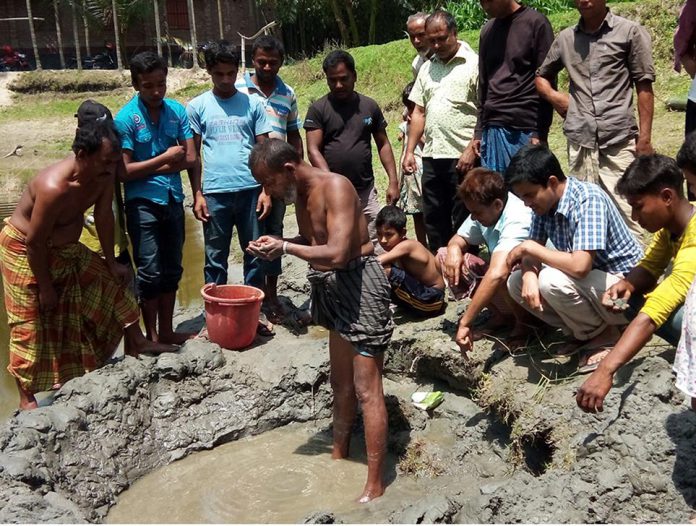 A mysterious pond seeping oil on the surface – at least that is what it smells like – in Dinajpur’s Khansama Upazila for a few days, drawing the curious attention of locals.

“A woman told me 15 days ago that the pond water smelled like diesel. But I did not believe it,” said pond owner Habibur Rahman, a resident of Tangua village in the Upazila.

According to him, he dug out the mysterious pond in 33 decimals of land some 25 years ago. But the phenomenon came to notice for a week or two at best.

During a visit yesterday, this correspondent found the villagers digging holes in the surroundings of the pond to ascertain the existence of petroleum substances in water.

“Even the earth smells of oil,” said Shahanur Rahman, another villager.

Visitors were seen soaking the paper in the water and setting them on fire.

Mir Abdul Hannan, a mining expert of Maddhyapara Granite Mining Company Ltd (MGMCL) in Parbatipur, said “oil can be found in a certain depth. But it needs more test by experts”.

While visiting the spot around noon, Sajebur Rahman, Upazila nirbahi officer in Khansama, told our correspondent, “We collected sample from the pond for a test.